With release of Module 8 in October 2008 the New Player Experience was completely revamped with the addition of the Korthos Village and Korthos Island zones as well as the short tutorial quests Shipwreck Shore and The Grotto.

Completing the Salvation of Korthos story arc (quest chain) prompts your character to travel on to the city Stormreach, the most populated settlement on the continent of Xen'drik. 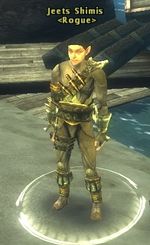 Shipwreck Shore is the first of two tutorial style Quests in the Welcome to Korthos story arc. Characters awake to falling snow on a desolate tropical island beach among floatsam and debris from a number of ships wrecks. A Halfling Rogue non-player character or NPC Jeets Shimis, who is exploring the debris, offers to guide the character on the first steps of their journey in Dungeons & Dragons Online or DDO.

After speaking with Jeets Shimis he runs up the beach trail to a small camp which he shares with to additional NPCs; the Warforged Sorcerer Talbron Tewn and the Human Cleric Cellimas Villuhne, who is currently exploring the mysterious grotto ahead. Characters when they arrive at the camp will need to speak with Jeets a second time in which they obtain a weapon from the Halfling in return for assisting his party of three NPC in a short quest.

Characters will need equip their new weapon and Jeets will then encourage the characters to give it a few swings and break a few barrels and boxes. A few tips may appear on the screen explaining Looting and the use of the Map.

Once your character begins moving up the path Talbron Tewn offers to lead the way to the grotto. Along the way characters can smash a few more breakables loot what they find as the proceed to The Grotto quest.

A Right Mouse Click on the entrance to The Grotto brings up the Quest Difficulty User Interface or UI. The Grotto only allows players to select Solo and Private Group while most quests in DDO provide Solo, Normal, hard and Elite difficulty choices as well as the opportunity to choose one of two grouping options.

The Grotto is the second tutorial quest in the Welcome to Korthos story arc. During this quest players will learn what DDO's adventure experience is about.

The final encounter will see your party matched against the Sahuagin High Priestess and two Sahuagin Elite Guards.

Your character will receive starter items as rewards upon completion of The Grotto.

Completion of the Grotto will result in your character zoning into the Korthos Village public zone. This is the first town area or public zone a character will encounter along their DDO journey.

Korthos Village and Korthos Island are unique in terms that they have two versions of each zones, referred to a the Snowy Side and the Sunny Side by players. Characters who have not completed the Salvation of Korthos or new player experience are on the Snowy Side and cannot move about the rest of the DDO's public zones in addition they cannot interact with players on the Sunny Side of the Korthos Chain.

Talk to a nearby NPC and get the quest flag, Welcome to Korthos, then go and find Wavecrest Tavern. Talk to the tavernkeep in there. He will direct you to other quest givers.

After finishing the three quests above, go back to the tavern and proceed to The Collaborator quest.

Once you are done with The Collaborator, talk to the mayor outside. He will grant you access to Korthos Island's wilderness adventure area. Collect quests in the village, then enter the wilderness area, find dungeon entrances located within and complete them. Redemption is the only quest necessary to advance the arc — the rest are optional.

You are now "flagged" for the quest Misery's Peak. Go and talk to Amalgam, a Warforged in the Korthos Island wilderness area, and start the quest. Keep in mind that your party members all have to be flagged as well to do this quest together. Quests that need flags cannot be shared with unflagged characters.

Upon completion, you will get The Salvation of Korthos flag. Go back to the village (it's not snowing anymore!), talk to the reward NPC Rinar d'Thuranni, and choose a reward item (but read the notes!). Then you'll get Sail to Stormreach flag. You are now done with Korthos!.

You only get a reward item the first time you complete Misery's Quest. This is important, because every single reward goes with a corresponding reward from Sacrifices to form a set that gives extra bonuses when worn together. Though this is the easiest way to acquire such a set at this point, the opportunity does arise again when dealing with The Maleficent Cabal.

It is required to go through The Grotto tutorial at least once per server, but on all later characters, players are allowed to skip this quest by choosing the "Skip Korthos Island story-line" option that appears in Jeets's very first dialogue. They are jumped ahead to 'sunny' Korthos Village, given all the loot and XP (bonuses apply) normally gotten from playing through The Grotto, and allowed to sail to Stormreach without delay by going to the docks and talking to the First Mate NPC.

Players can also go to the end of the dock to ask the First Mate to take them to Stormreach, any time they want (including on the first character); she'll ask to confirm that the player is sure he wants to do that, then take you across. Returning (to the "sunny side" - see below) is just as easy, and no quest opportunities are lost.

Nothing is lost by leaving Korthos early except the ability to team with characters who haven't left it and haven't finished it (see next). All players can freely return to Korthos whenever they like and run or re-run all quests there for reward items or Favor.

The content of the two towns is identical. All the same NPCs, quests, and loot exist in both, and they even share chat channels. There is one pesky difference, though: players in one version cannot team up with players in the other.