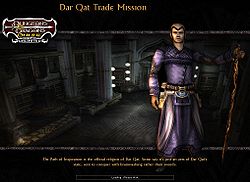 Jeets Shimis told you that there is an artifact called the Mindsunder hidden inside the Dar Qat Trade Mission. The Path of Inspiration is using the Mindsunder to magically convert Stormreach's citizens into mindless followers, a process that will take only a few days.

To stop their plans you must enter the Dar Qat Trade Mission in the Inspired Quarter and destroy the Mindsunder. Jeets urged you to use caution when entering the Trade Mission.

Note: If you don't have all 4 discs, don't put any in. They will not be returned to you, even if you do not get your treasure.

All drop from an optional end chest, Min Level 18, Bound to Account