You can craft Schism Shards acquired from the raid Killing Time with certain epic-level weapons to receive an upgraded or altered legendary weapon. Schism Shards are Bound to Account on Acquire 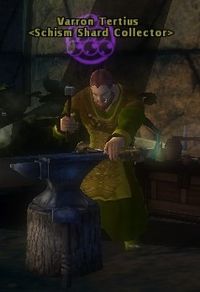 Varron can upgrade your gear

Unlike most crafting systems, the base weapons capable of being upgraded exist across three entirely different quests from separate adventure packs:

Desire in the Dark

The Temple of Elemental Evil

Each of the recipes to upgrade or alter the White Plume Mountain weapons also requires that weapon's respective sentient jewel.

WARNING: Any Mythic or Reaper bonuses the base weapon has will be lost on upgrade.