The Night Revels is a special event held in Delera's Graveyard during the Halloween season, first introduced in 2015 (Update 28 Patch 1). It is a replacement and newer incarnation of the Mabar Endless Night Festival. Old Mabar ingredients are not used for the Night Revels event and ingredients from each year's Night Revels expire before the next year's Festival.

Characters of any level can enter the graveyard instance to farm keys and chocolate, but the challenge-quests are restricted to characters of Level 7 and higher. 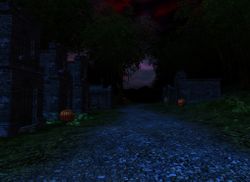 The Delera's Graveyard can be entered in three modes while the event is active:

Entering the Night Revels challenge instances requires the keys earned in the graveyard:

Running The Night Revels - Delera's Graveyard challenge at more than 4 levels below character level results in no chocolate or keys dropping.

Some of the following tips might be obsolete after 2018 changes:

(Note that currently, although there are nine challenges excluding Eternity Unleashed and Delera's Graveyard, only eight are available for each run of the event. Which challenge is excluded changes year-on-year.)

All challenges range from level 7–37.

The Night Revels challenges are played like quests, unlike House Cannith and Eveningstar challenges, and have no set time limit; characters can zerg through and finish within minutes or can go AFK in the instance and complete hours later.

Another important difference between Revels challenges and Cannith/Eveningstar challenges is that they do not require that the players remain inside the instance, they do not lock after a certain amount of time and they do not require an extra key to re-enter an active challenge (Clarification: You must have at least 1 key in your backpack even though none are consumed upon re-entry). This means that there is no penalty to releasing and re-entering the challenge if you die. Even if you are not in a party, leaving the challenge without leaving someone inside will keep the instance active for 5 minutes.

Named mob kills within the instance have a chance to drop Chocolate.

"more than 5 levels difference" has not been verified in-game. Please verify it!].

The rewards depend on the score and are calculated and awarded when the challenge is complete. Completing an optional star objective after completion will not provide extra rewards. The rewards are either 1x, 2x or 3x the score of the challenge. So if your challenge score is 23 because you completed all the star objectives in Grave Work CR 20 while the whole party was level 15 or less, you would get 69 Black Apples and 69 Chocolate as Grave Work gives rewards equal to 3x the score.

Completing a challenge awards Pieces of Darkest Chocolate plus one of the other ingredients:

All ingredients (Chocolates, Almonds, Apples, Caramels and Cinnamon), Night Revels Keys, and Candies (from the rewards list below) state in their item description that they will expire and disappear near the end of the current year:

There were no specific changes to The Night Revels in July 2021, except that it was announced expireable items were to be reintroduced in Fall 2021. [1] This instance of the event was called "The Spooky Summer Event".

There were no new dungeon challenges nor treasure items in 2020. The only change for that year was a *lack* of change: keys and ingredients from the 2019 event did not expire, so players could use the ones left over from last year. [2]

As always, ingredients deposited in Shared Bank appeared as their "rotten" (expired) versions, but displayed as "normal" when pulled out.

Due to a bug preventing it from completing, Eternity Unleashed was closed for some time.

Most weapons and equipment come in multiple versions that need to be upgraded incrementally.

During the special event the monster champions get a more spooky appearance, with a pumpkin head appearing under their Champion crown.

A champion crown during the Night Revels.

In addition, during the event, a unique Champion type. Shadow of Mabar, can appear. These Champions gain Incorporeal, Concealment, Light Absorption, and permanent Deathblock. On death, they will drop a chest with a small amount of Pieces of Darkest Chocolate and a high chance to yield a Night Revels Key. 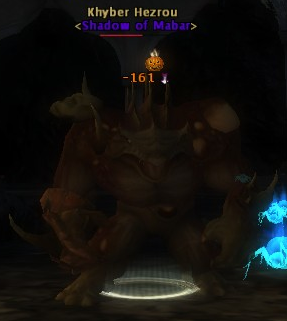 A Khyber Hezrou with Shadow of Mabar.

During this event, Beholders may sometimes randomly have a pumpkin or skull costume applied to them, as per the Skull Head and Pumpkin Grenade (see right and below.) 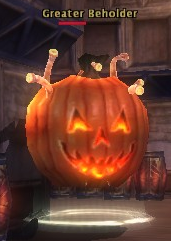 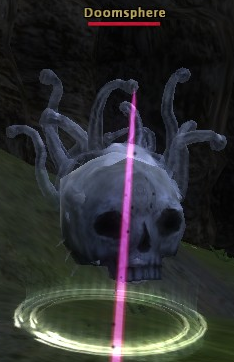 The event ran from October 5th to November 1st, and was briefly brought back for an encore from December 16th to December 21st.