Filigrees are ingredients, found during questing, that can be added to a Sentient Weapon or Minor Artifact to increase its power. They work in a similar manner to augments, i.e. a filigree fits into an open slot on the weapon. A weapon can only have one of each filigree: two of the same filigree cannot be slotted in one weapon (rare and non-rare versions of the same named filigree count as the same for slotting purposes).

Filigrees are unbound, and can be traded and auctioned. Filigrees can be (auto-)collected into an augment bag, and can be found under "Item Augments" in the Auction House and Shard Exchange.

A Sentient Weapon is created by adding a sentient jewel to an eligible weapon, and starts with one open filigree slot. More filigree slots are created by feeding named items to the sentient jewel, to a maximum of 7 slots. The Sparks of Memory, Dream and Logic can be used, in no particular order, to unlock 8th, 9th and 10th slots.

Filigrees are grouped into sets. When more than one filigree from the same set is added to a single weapon, additional Set Bonus benefits are gained. Further benefits are gained as more filigrees are added. Some sets only grant Set Bonuses for the first 3 pieces of a set added to the weapon; other sets grant additional Set Bonuses at 4 and 5 pieces. There are always more pieces to a set than there are set bonuses, allowing choice in the filigrees slotted to achieve the Set Bonus.

There are well over two dozen different filigree sets:

Over time new groups or Generations of filigree sets are released. Each Generation of filigrees drops in the chests from a limited series of adventure packs (listed in the tables below). 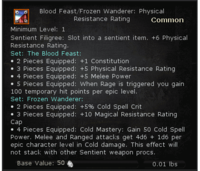 One of the raid filigrees
(mouse-hover for pop-up) 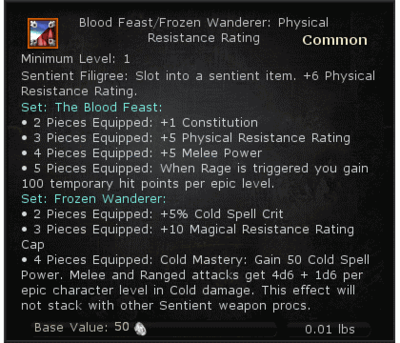 The following powerful filigrees can be purchased for Threads of Fate from endgame raids. Unlike regular filigrees, these raid filigrees each belong to two Generation 1 filigree sets:

The following powerful filigrees can be purchased for Threads of Fate from endgame raids. Unlike regular filigrees, these raid filigrees each belong to two Generation 2 filigree sets: