The Claw of Vulkoor has appeared deep inside territory belonging to the local fire giants. 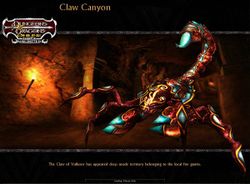 The Claw of Vulkoor has appeared near the Raveneye refugee camp. The Claw bestows a blessing upon any drow who uses it, but unfortunately it has appeared in territory belonging to hostile fire giants.

Croaker wants you to travel to Claw Canyon, west of the drow camp, and try to negotiate passage through the fire giants' territory.

(* Note - It's possible to get this item to drop in both chests, however, it is exclusive)