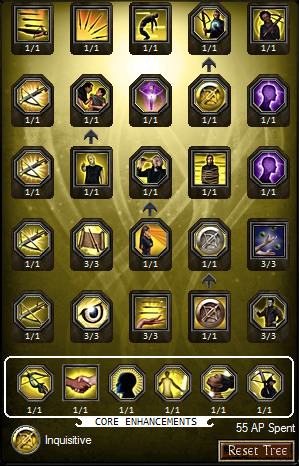 Curious Inquisitives can transform any light or heavy crossbow into a pair of hand crossbows and excel at both shooting first, and asking questions.

The Inquisitive is a universal enhancement tree released with Update 41 Patch 4. Based on the Master Inquisitive prestige class in the 3.5e Eberron Campaign Setting, Inquisitives are investigators who specialize in solving mysteries and shedding light on the darkest secrets. In DDO, those who use the Inquisitive Universal Enhancement tree gain skills that focus on Diplomacy, Law/Chaos damage, finding hidden things, and a new Dual-Crossbow combat style.

In the same way that Vistani Knife Fighter has a Tier 1 enhancement that changes your combat style, Inquisitive has a Tier 1 enhancement that changes the way Light and Heavy (non-repeating) Crossbows are used. With this enhancement, any Light or Heavy (non-repeating) Crossbow you equip splits into two smaller hand-crossbows in your hands, each firing a shot every time you attack. Both of these shots use the stats of your single (equipped) Crossbow. Since Update 45, you can use 50% of your Doubleshot while in dual crossbow combat style.

Inquisitive is not free to VIP. It is included in some bundles of the Masterminds of Sharn expansion, and you can unlock it on a per-character basis by achieving 225 Sharn City Council favor. It is also purchasable via the DDO Store for 495