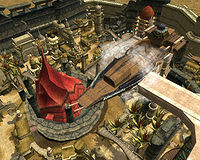 Inside The Marketplace Bazaar

The Marketplace Bazaar was a large red tent in the middle of the Marketplace. Vendors were set out on different floors whose wares included reagents, armor, masterwork weapons, potions, and more.

During the live event of Module 6.1, the Marketplace Bazaar was destroyed. With Module 7, players were to unlock the Subterrane - the new high level Wilderness Adventure Area - and associated dungeons beneath its ruin through the Race to the Subterranean live event.

Module 6.1: A Storm Brews over Stormreach[edit]

Devils from the plane of Shavarath instigated an invasion of Stormreach. Random portals appeared in the marketplace and small bands of devils attacked every few hours.

A few days later a huge swirling portal appeared over the Bazaar tent. Soon all the NPC vendors moved out of the Bazaar and into the Rusty Nail tavern near the Steam Tunnels. A floating citadel appeared between the bank and the Bazaar tent, with platforms to climb to the top and meet Veheer F'nord of the Twelve, who is leading the research team to discover the devils’ intentions and a way to defend Stormreach.

The vortex over the Bazaar grew in power and the tent flailed helplessly in its wake. Devils took up residence and posted guard at each entrance to the Bazaar and a magical force field emanated from the portal, protecting the devils from further attack.

On March 7, 2008, the Stormreach wizards set up a counter assault, firing magical beams into the portal from points along the tent’s perimeter. The beams coalesced into a single beacon of power which succeeded in destroying the portal to Shavarath! However the ensuing explosion also destroyed the Bazaar as well, leaving a debris-filled crater in the center of the city!

The Devil Assault quest has since become available for players to defend from four waves of increasingly difficult devils, minions, and bosses.

Official promotion video involving the story of this event is available on Turbine's official YouTube channel.

Module 7: Race to the Subterranean[edit] 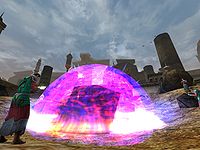 The magical force field sealing the entrance to the Subterrane

High level content from Module 7 didn't become available as soon as it went live. Instead, in order to "unlock" them, players were tasked to grind older raids from previous modules, get tokens from warded chests and turn them in to NPCs in the Marketplace. The number of tokens turned in were counted per raid and per game server; thus, the main focus of this event was on competition between the servers.

Once enough tokens were turned in for all the NPCs, the force field to the Subterrane was dropped by them, making it accessible to players.

(World Event): Mystichaze Shastien has enough Baatezu Runes. She begins to cast a spell of immeasurable power against the devil shield in Stormreach's marketplace.

Module 7 also revealed rework of Three-Barrel Cove adventure area; you can find remains of the Bazaar there.

Sitting atop the once decimated location where the Shavarath portal blasted a crater into the Marketplace, the Remembrance Plaza serves as both a tribute and vendor center. A memorial has been erected to commemorate the brave heroes who fought back the Devil invasion. Around this memorial, a beautiful new tent has been constructed! With vibrant colors and a lovely open air maypole design, it’s even better than the Marketplace tent that was lost to the invasion. Visitors can stroll across the mosaic floor and through the open fabric corridors to shop with vendors, or pay their respects at the memorial seal.

Update 7 saw a new raid The Chronoscope, which was basing on the mysterious disappearance of Nat Gann during the Devil Invasion, and took the players back to the ground zero to witness the culmination of the live event.