A terrible doom is written in Kundarak's shards! I must complete my studies! I will never escape this place alive. My sacrifice must not be in vain! I do not regret my bargain with the Aurum! There was no other way!


Description: The final raid boss of the Vault of Night series, encountered in the Plane of Night raid which was introduced in Module 1: Dragon's Vault. She is the ex-leader of the Agents of Argonnessen until she fell out of favor and teamed up with the traitorous Arach d'Kundarak and the Aurum to try and somehow protect the dragonshards from the devils.

Strategy (Epic, but should apply to all difficulties) 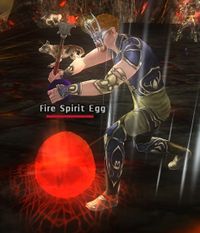 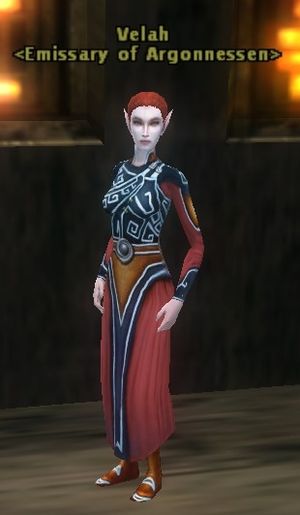 Description: Ex-leader of the Agents of Argonnessen.

Notes: Before she is killed in the Vault of Night, Velah can be seen in another areas of Stormreach. She is also mentioned by other NPCs around the game. Those are listed below in chronological order.

Velah and Cydonie are seen on the back of the floating tower from where Veheer F'nord coordinates the resistance to the Devil Invasion.

Velah can be seen sit in a reserved table, talking to a dwarf. If you approach, you can hear their dialogue, one phrase at a time:

If you try to talk to them, however, each one will try to expel you from the proximities:

Although this is a foreshadowing for the Vault of Night storyline, they never leave the tavern, even after you complete the Plane of Night.