Burn your foes with Infernal flames as a charismatic Tiefling! Tieflings are touched with the power of Infernals. They excel in a variety of roles, including Warlocks, Favored Souls, and Sorcerers, and start with a bonus to Charisma.

Tiefling player race was introduced in Update 41 Patch 4. Originally a premium race, Tiefling was made free in Update 53.

It has a unique appearance containing custom horns and fully animated tails. Their tails are animated to interact with cloaks without clipping through them, so you'll be able to enjoy the many options for customization without worrying about intersections. The position of the horns on the head, just like Dragonborn, exclude them from the appearance of many helmets that cover their face or brow.

The Tiefling race itself is heavily focused on spellcasting, and both the base race and the iconic revolve around playing with Darkness. While both the heroic Tiefling and the Iconic Tiefling Scoundrel can conjure darkness at will, as they specialize how their darkness affects them. Tieflings working together are able to use each other's darkness during fights.

Tieflings begin on the beach on Korthos as a level one character of any class you choose. 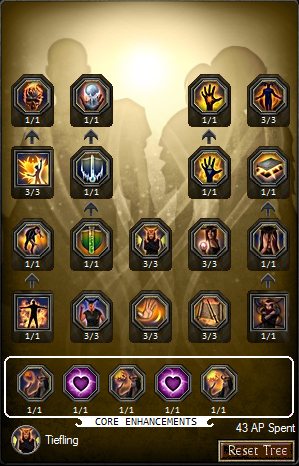