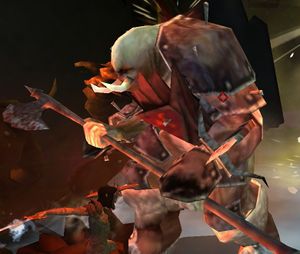 This bank is closed! Leave, or your lives will be withdrawn!


Description: Blood Plate is one of the 3 main raid bosses of The Chronoscope, introduced in Update 7. Blood Plate is encountered in the marketplace bank, and is the first proper boss of the raid.

Generally the expanded Epic strategy below will apply, just you'll obviously have less access to crowd control. Being the monsters have so little HP that you should be able to eliminate them all - even the bearded devils, and then engage Blood Plate with plenty of time to spare.

Gather your group in the Lordsmarch Bank - preferably with your casters having most of their SP left. Shrine in the nearby phoenix tavern if not. Buff up with resist energy: all, except sonic (Blood Plate doesn't deal sonic damage like your average orthon). Blood Plates main strength is his ability to teleport away to have his armorers repair him (heal him), then return to the battle with several reinforcements. So the idea is to kill the armorers quickly before they return up top - roughly 1-2 minutes. In addition to the 2 armorers you'll fight each wave, there are also 2 tiefling casters, 2 tiefling archers, and 2-4 bearded devils to deal with. So set up crowd control - Otto's Sphere of Dancing, Fascinate, Hold Monster, Hold Monster, Mass, and Web are the most effective. Take down the attackers in this order to be safe: Casters, Armorers, Archers, Bloodplate. The bearded devils have massive HP, so unless your group has massive DPS, you may wish to simply CC those, then focus on Bloodplate. You generally should be able to take him down in 2-3 waves, but the fight could go on longer if your lacking in DPS. Alternatively you could simply have everyone ignore the trash and focus on Blood Plate and try to bring him down immediately in 1 round - very difficult, but doable in a ultra high DPS group.