Tarvis: "Brothers, it is time for us to combine our strength!"

Vitter: "Yes, I will add the cold frost of the savage north!"

Squall: "I'll add my lightning! It will smash them with the power of the storm!"

Nox: "I will add the most lethal venom known to nature! Their blood will turn black!"

Drekk: "My acid will liquify their bones!"

Tarvis: "And I will form the head!"

Conjoined Abishai Devastator: "Nothing can withstand the might of the Conjoined Devastator!" 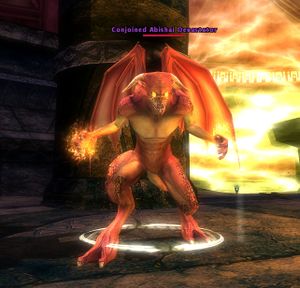 
Description: Raid boss of The Chronoscope. The Conjoined Abishai Devastator is a mix of several powerful red named Abishai of different colors, which combined to a create a much more devastating Abishai.

The Conjoined Abishai Devastator features 5 forms: Red (Fire), Green (Acid), Black (Necromancy), White (Cold) and Blue (Lightning). He always starts in the red form, and will change at random intervals. Most forms allow him to cast different spells, as well as unleash a devastating special attack. The specials are as follows:

He is primarily a caster boss and casts spells quite often, but all will be directed at only 1 target. His spells will vary based on form somewhat: