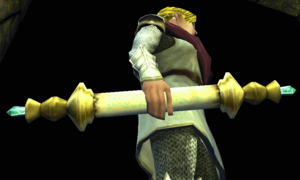 A scroll contains a single use of one spell. Characters can wield and use a scroll to activate its spell without expending Spell Points or material components and even if they cannot cast that spell themselves.

Scrolls do not benefit from Metamagic feats or from the character's item properties, ability modifiers, and Enhancements that affect spells, although there are separate Enhancements that improve scroll effects. Scrolls with spells that appear on the Sorcerer/Wizard spell list and that need a somatic component are subject to Arcane Spell Failure even if the spell also appears on a divine spell list or the character using the scroll is a divine spellcaster or a Bard in light armor.

Each scroll has a predefined caster level that is used to determine its spell's strength regardless of the character using it.

Wizards, Artificers and Alchemists can inscribe scrolls to permanently learn their spells.

Comprehensive Lists of All Available Scrolls[edit]

A character may use a scroll if one of the following conditions is met:

1. The character could use the spell himself at his class and level.

2. The spell appears on the character's spell list at a higher level than he can currently cast, and his overall character level meets the scroll's minimum level.

This requires a check and may not succeed. The game rolls 1d20 and adds 2x the character's caster level. If the total is at greater than or equal to 2x the level at which he could cast the spell himself, the attempt to use the scroll succeeds. This gives a 95% chance of success if the character is one level short, 85% for two levels, 75% for three, and so on. The scroll is destroyed whether the attempt is successful or not.

3. The character has a sufficiently high Use Magic Device skill.

This method also requires a skill check and may not succeed. The game rolls 1d20 and adds the character's UMD skill. If the total is greater than or equal to the scroll's UMD DC (18 plus 2x the caster level of the item), the attempt to use the scroll succeeds. The scroll is destroyed whether the attempt is successful or not.

If the character meets both the last two cases, the game makes only one check using the method most likely to succeed.

The easiest way to identify the spell level of a scroll's spell (so you know what type of Spell Inscription Materials it requires, etc.) is by the Caster Level of the scroll. The Caster Level of a scroll will be the lowest level that a character can gain that spell at (except 'Repair Serious Damage, Mass' which uses the Wizard minimum level of 13 even though an Artificer could get the spell at level 12).

Scrolls can be bought from several places in DDO:

Scrolls not available from vendors[edit]

Not all scrolls are available from vendors. Several Area of Effect scrolls like Wall of Fire and utility scrolls like Dimension Door were deemed too powerful and removed from vendors in Module 4 Patch 3. Additionally, there is often a considerable lag between spells being added to the game and scrolls of those spells being added to vendors (if they are ever added at all).

There are no vendors for Bard / Druid / Ranger / Warlock specific spells, although rarely some Bard and Ranger spell scrolls will drop in chests. However, Barkskin, Camouflage and Longstrider scrolls are sold by the Level 1 and 2 divine scroll vendor Kylanni Baum in the Marketplace.

It's a very good idea for wizards and artificers to learn these rare spells when leveling up since those scrolls are harder to acquire for inscribing.

Rare scrolls drop in chests and are sold in the Auction House.

Of special note is Master's Touch, while it is true that it can be purchased and is thus not a true 'rare' scroll, the only place to purchase a scroll of Master's Touch is from a vendor in the the Portable Hole, a location that requires the use of the Teleport (or Greater Teleport) spell. which isn't readily available to low-level artificers.

All Artificer Level 2 scrolls are available at vendors

There's no vendor in Stormreach that sells level 5 artificer-specific scrolls. Some scrolls that are also arcane are available from arcane vendors.

There's no vendor in Stormreach that sells level 6 artificer-specific scrolls. Some scrolls that are also arcane are available from arcane vendors.