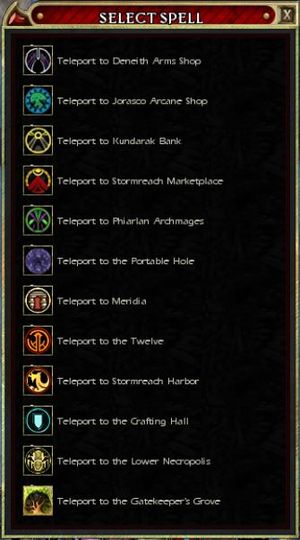 Lets you pick from several destinations (Most public areas in Stormreach, plus The Portable Hole, an area only accessible with Teleportation spells), and instantly transports you there with a 3% failure rate.

Teleport is also available from the Greater Dragonmark of Passage as a spell-like ability for Human characters. (Includes all destinations).

If this spell fails, you appear hundreds of feet in the air above the Marketplace. The Dungeon Master will comment:

Magic is a curious thing; full of hope and promise one minute, then everything goes pear-shaped.

The fall from the highest point will do close to 100 damage, though a score in the Tumble skill can reduce that some. There is enough time to allow you to cast the Feather Fall spell or to cast Teleport again to break the fall.

Some monsters like Devils and Reapers can teleport in the dungeon. This ability is sometimes used by the players to separate those dangerous monsters from the rest by placing an obstacle between the players and the monsters.

Arraetrikos in the final phase of The Shroud can teleport players to him.