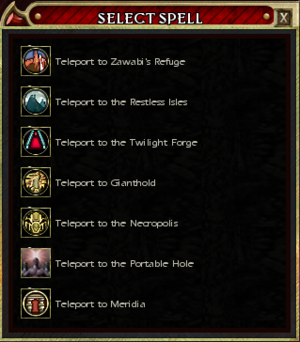 Confers to the Player Characters in the area of effect the option to be transported to 1 of a variety of locations.

To teleport the entire group, this spell is restricted to non-public instances (i.e. only from inside quests or wildernesses). However, as of Update 39 there is a self-only teleport option which allows the caster to teleport themself (only) from either a public or non-public area.

When cast on a group, before teleporting, each person, including the caster, is given the option to accept or decline the teleport. A self-only teleport does not require accept/decline for this option, although it only targets you.

Hirelings and summons are not transported and must be re-summoned upon arrival. Since all locations except The Portable Hole require an adventure pack or VIP, this spell is of limited value to a group of free to play players without any packs. If a destination is selected when you do not have that relevant adventure pack, the spell will simply fail. WARNING, if this happens when it was cast via scroll, the scroll will still be consumed (wasting what you paid for it).

Note: Unlike regular Teleport, Greater Teleport does not have a chance to fail and send you to the wrong place.