House Cannith is one of the Dragonmarked Houses found in Eberron. 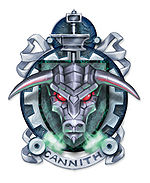 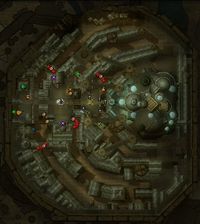 Introduced in Update 12, The Vaults of the Artificers challenge system offered four new dungeons. These four dungeons are separated into 12 challenges with different rewards available. Nine of these challenges have a separate "Epic" variation available, for a total of 21 separate variations across four dungeons.

The challenge pack can be purchased from the DDO Store granting unlimited access to the challenges. However, free players can use free daily Universal Challenge Tokens to enter the challenges.

Completing challenges grants favor for House Cannith: one Favor point per star achieved, plus an additional favor point if you five star a challenge on its maximum available level. This extra point increases the total of favor to six, hence the term "six-star run" although only five stars still show in your compendium; You can differentiate a five-star run from a six-star run because the color of the stars changes from a blueish color to an orange/yellowish color. With 21 challenges available, this means there is a total of 126 favor possible. (*Note*: Stars are not earned progressively. Only the maximum number of "Star Objectives" completed within a single instance will be awarded.)

or can be unlocked on a per server basis by earning 150 House Cannith patron favor.

There is much more than 150 House Cannith favor in the game, but much of it is Epic level, requiring a character of at least Level 20. And, due to a bug in two of the free* Challenges (see below), you also need access to the quest pack Secrets of the Artificers to earn the 150 favor needed. So, first, understand that you're not going to do this on a new account, or at least not very soon.

So, 4-star completion on the 2 bugged challenges, plus 6-star completion in every other House Cannith challenge, yields a total of only 122 favor. That, plus the 27 from the free Level 28 quest, is 149, leaving you still 1 point short of the required 150. Meaning... currently, you need the quest pack.