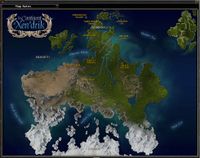 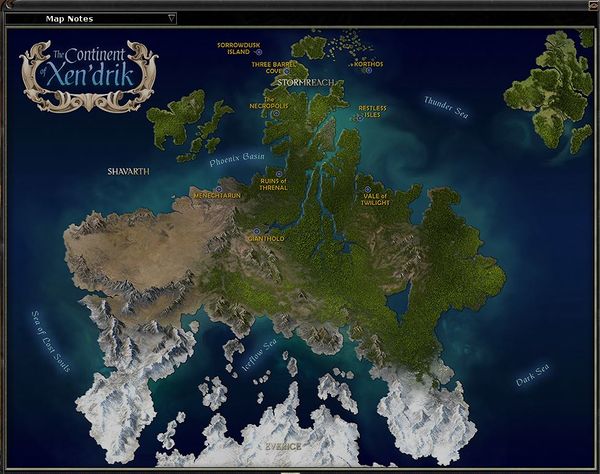 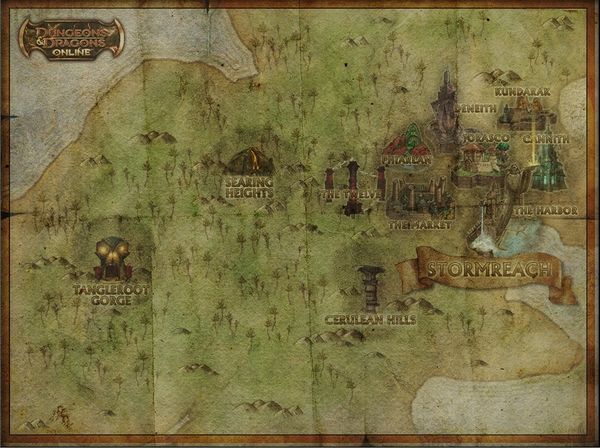 Your character's adventures in Dungeons and Dragons Online begin in the village of Korthos. Upon completing or bypassing the New Player Experience characters are transported via ship to The Harbor area of the city of Stormreach which in turn provides you with options to explore in locations throughout Xen'Drik, a jungle continent of vast size and varying climate. Xen'Drik lies to the south of Khorvaire, the primary continent of the Eberron campaign setting.

Stormreach is the largest populated frontier city of the continent. It is a former pirate city, built upon the ruins of an ancient civilization of giants. Stormreach is the adopted home to a variety of people and places.

Among all the places you'll visit, you'll meet many people who will engage you in a variety of Quests. Often you will find yourself in a Dungeon, where you can gain experience points which will help you to build and advance your character.

Shops, general vendors and pawn shops are all areas that you can sell your loot that you gain from from quests.

At inns you regenerate both your hit points and spell points over time. The base rate is the same slow rate as in the rest of the city (1 HP + 5 SP per 6 seconds, or 2 HP + 8 SP if you have the Blessing of the Silver Flame permanent favor reward effect), but you also have the option of buying varying types of food (for hp) and drink (for sp) from the Bartender (see Rations). Food and drink greatly increase the recovery rate of both your HP and SP for a minute or so or until you leave the inn.

Inns also recharge all your items and abilities as if you had rested. This happens once per minute for as long as you remain inside the inn. Inns also allow Clerics, Rangers, Artificers, Wizards, and Paladins to change which spells they have prepared.

Each inn has a Spirit Binder whom you can talk to - this will set that inn as your bind point, free of charge. You will re-spawn at that inn upon dying and releasing your spirit until you change your bind point again. The command "/resloc" will show where your current bind point is. If you would like to get to your bind point quickly, the command "/death" can get you there. Keep in mind however, you will die.

Notes:
1. There are also several locations that do not have a visible tower, but still provide access. Airships can also be boarded at:

Note also that in House Cannith, an airship tower can be seen on the skyline towards the southeast, but is inaccessible.

This link is a spreadsheet of some of the people & creatures you will meet in Stormreach. Feel free to add to the list.