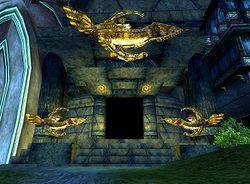 Outside View of Airship Showroom

A Guild Airship is a private area in the game where access is limited only to guild members (and any guests who are temporarily invited there). Access to airships is available via various points in each area of the game.

An airship provides 2 main advantages to characters who can visit them, guild members and invitees alike - faster movement around the different areas of Stormreach and beyond, and various ship amenities, which must be custom-added by guild Officers.

The Airship Showroom is located in the center of the west edge of The Harbor, adjacent to the Airship Portal there. (On your map, it appears as a green star.) Here (and only here), airships can be viewed, purchased and/or upgraded. Note that only Guild Officers (including the Leader) can purchase or upgrade an airship, although once you have one any member can contribute platinum or astral shards, which may be used later to upgrade your current ship to something more desirable.

Once inside the showroom, speak to one of the two NPC Airship Vendors (Vordrik d'Lyrandar), and you can scroll through the various models available. You can also deposit platinum and/or astral shards (both non-refundable!) to the Guild's account, which are required to make the purchase itself. These vendors will also show you how many Shards and/or Platinum your various guildmates have currently contributed on deposit toward a ship.

Once you select the model you want (and there is enough on deposit to purchase it), the "Upgrade" button will be highlighted, and you can press that to make your purchase.

With any purchase or upgrade, you are also immediately asked to (re-)name your ship. This is free, but the name must be chosen before leaving the vendor.

In many city zones, there is an airship tower that may be used to board Guild Airships. They also serve as the disembarkation point when leaving the Airship. Airships may be disembarked by talking with the captain and selecting a location on the menu, by using the teleport spell, or simply by jumping over the edge*. Depending on the amenities selected, airships may also be crewed with Navigators or equipped with Farshifter's Chambers which allow more destinations.

* After a long, looong fall, you will land in a random location somewhere around Stormreach - often the Harbor (possibly in the water itself) or Market, but not always. Landing in water is safe (once you surface), but anywhere else will usually be enough kill most characters. Feather Falling is recommended to avoid this inconvenience.

Airship Beacons (see below) can also be used to travel to your Guild Airship.

Airship towers are your main access to and exit point from Guild Airships. There are a number of them throughout Stormreach, one in most of the major city zones. All towers have similar architecture and are very tall, and so can usually be spotted from quite a long way off. On your map, they are marked with a lime-green anchor, which shows on mouse-hover as "Airship Access".

Airship Towers are located in:

Note that a tower can be seen from House Cannith towards the southeast, but is inaccessible.

There are also several locations that do not have a visible tower, but still provide access. Airships can also be boarded at:

You can reach several locations if you jump/step off the airship from different points.

Airships can be given a name after purchase by talking to one of the Airship Vendors in the Airship Showroom. The first (re)name is free. Afterwards, renaming an airship costs 18 AS.

The main function of the amenities is to provide various buffs to guild members before questing. Many of the various buffs offered are typed as Guild bonus so they stack with the more common Enhancement bonuses (and also with the older Legacy buffs, which can be emplaced in the Cargo Hold). However, some amenities can also provide convenient services, such as mail, banking, vendors, and even crafting facilities. Each Amenity is acquired and placed separately, so the amenities each airship offers can be completely customized, although top-level guilds tend to have (almost?) all possible amenities available.

Post-U22 amenities occupy either Hold rooms (smaller) or State rooms (larger). Some amenities may be purchased with platinum while others must be purchased with Astral Shards. Once purchased, the amenities do not expire like pre-U22 amenities. Amenities may be swapped in and out as desired, and are not lost if removed or replaced. Unlike pre-U22 amenities, they do not have to be visited individually to be acquired; there is now an "amenity bar", a clock-work device conveniently located centrally on the main deck, that will apply all available buffs when used. Post-U22 buffs do not disappear on death, unlike pre-U22 buffs. These buffs start with 3 hours duration and raises up to 5 hours depending on guild level (as shown in the table, right).

(Bug: The in-game list of Guild Rewards states that the final duration increase is at level 140; however, it actually kicks in at 125.)

Amenities have different minimum guild-level requirements. As a guild progresses, guild Officers can improve the airship by adding newly available amenities, and can also replace the airship with a larger model that holds more amenities. Some amenities can also be upgraded, replacing lesser versions with improved ones that offer a higher bonus in the same category. Some groups of smaller amenities (those fitting in several Hold rooms) can be replaced with single larger amenities (occupying one State room) that combine the effects of all the smaller amenities.

Before placement, amenities take the form of "deeds", items that take 1 storage slot in a backpack, bank or storage chest. After placement, they become visible somewhere on the airship. taking the form of some colorful room or another. Some amenities can be purchased with platinum, others only with Astral Shards, although they can also (rarely) be found as drop-loot from chests in quests (and so also irregularly in either the Auction House or Shard Exchange). Although anyone can acquire an amenity deed from a chest or by Auction, only Officers can install (or move/uninstall) Amenities on a Guild airship. Not all amenities seem to drop as loot, see list: Guild Airships/List of amenities available from quests.

Different amenities can fit only into different "hook points" on an Airship. The hook points are represented by different rooms on the ship, and different models of airships have different numbers of small or large rooms for large or small amenities.

The bonuses of many amenities scale based on Character Level, and are listed in the format "A/B/C", where A, B & C are the numeric values of the bonuses. Any bonus that cannot be divided by 3 does not scale at level cap.

Elemental Absorption and the experience bonus from the Shrine of Experience do not scale, as they are increased manually by upgrading amenities.. Other bonuses may or may not scale - please verify.

Airship Amenity Deeds can appear in quest arc end reward lists (the drop rate is quite low...). They can also rarely be found in treasure chests.

* Indicates that this amenity is also available through a consolidated State Room amenity ( see next section, below).

Starting at Guild Level 34 (with the Proving Ground), State Room amenities can be purchased which combine the functions of multiple Hold Rooms into a single amenity, potentially freeing up Hold Room hook points for other uses.

To achieve this consolidation, an airship must have an open slot for a State Room.

Note that these three State Rooms...

...provide unique services, and are not consolidations of Hold Rooms.

There are a total of 23 Hold Rooms that are not consolidated into other rooms. The Grand Reliquary consolidates the Shrine of the Silver Flame, the Shrine to the Devourer, and the Stormreaver Memorial, but these can be upgraded to provide increased bonuses before the Grand Reliquary is upgraded. So you may need 23 or 26 hold rooms for maximum bonus.

There are a total of 6 State Rooms (or 5 plus the Grand Reliquary).

The Daedalean Kraken can thus fit every room (26 Holds + 5 State Rooms or 23 Holds + 6 State Rooms), and is the only airship able to do so.

Airship amenities used to use a different system - in U22, Guild Airships were changed. However, those amenities are still available should Guild Officers desire them - and there are several that could still be useful, depending - ymmv.

Consequently, there are two classes of amenities, pre-U22 and post-U22. Pre-U22 amenities occupied "crew", "small", or "large" hookpoints. Pre-U22 amenities are rented by purchasing contracts which last for a number of real-life days. Buffs last one hour of clock time and disappear on character death. These continue to function as previously but are now located in the cargo hold.

Since Update 45, old amenities that grant elemental resistance or stat boosts are no longer sold.

Some parts of the airship can be recolored using dyes from the DDO Store. They are permanent until a new dye is used. They can only be applied by Guild Officers and Guild Leaders. To apply, stand on your airship and use the dye.