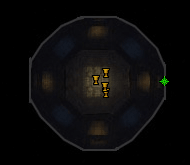 Lordsmarch Palace is the residence and meeting halls of The Coin Lords.

The Palace is accessible from Lordsmarch Plaza, a public instance that connects to the entrance to The Twelve and the Marketplace. Ona Mariden is the palace steward and will greet you.

Before a player character obtains any of the quests from the Attack on Stormreach series, exploring the interior of the Palace will show the four leaders of the Coin Lords: Yorrick Amanatu, Varen Lassite, Graden Wylkes and Delera Omaren IV, seated at a table while Hesstess, a Medusian ambassador from Droaam, speaks to the Coin Lords.

Once any of the quests are chosen (Diplomatic Impunity, Frame Work and Eyes of Stone), the interior of the Palace shows the Coin Lords each in a state of anxiety.

The quest "Eyes of Stone" takes place in both the Plaza and the interior of the Palace, where you must rescue the Coin Lords from an assault from within.

Once a player completes "Eyes of Stone" (or if the 'skip ahead' option is chosen), the Coin Lords inside the Palace hall will themselves give four additional quests: Assault on Summerfield, Blockade Buster, Undermine, and Siegebreaker. Of these, "Undermine" begins in a private instance of the Plaza.