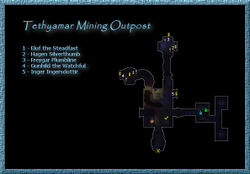 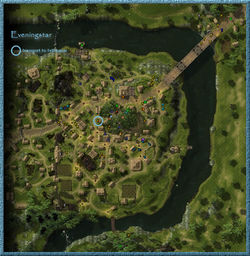 On the southern reaches of the vast Tethyamar Mines, a small, secluded outpost opens its doors to adventurers looking to assist them.

Tethyamar Mining Outpost is a public area introduced in the Update 36 adventure pack, The Mines of Tethyamar:

The Tethyamar mining outpost is approximately 350 miles from Eveningstar, to the North-North-East, well beyond the Storm Horns. It is located in the Desertmouth Mountains on the Eastern border of the desert of Anauroch, where the Empire of Netheril has been re-established.
The mines of Tethyamar were once home to one of the greatest dwarven communities in the North. The mines were very deep, following the long vertical veins of ore that lay beneath the Desertsmouth Mountains. Along these descending ore-veins, chains of chambers were constructed making up the housing, forges, tombs and storage areas of the dwarves of Tethyamar. This design resulted in a far more widespread dwarf hold relative to others of its kind.