The Age of Giants claimed the lives of many elven refugees. The sacred site is where their remains are entombed. 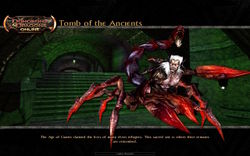 The Drow have been desecrating burial temples across Xen'drik.

Avanti Moonwillow, emissary of the Undying Court, has asked you to prevent the Drow from doing this to the Temple of the Ancients.

The Undying Court has also requested that you ensure the safety of the Venerated entombed inside.