Reaver's Refuge has all the amenities of a city zone, with numerous NPCs, a tavern, a mailbox, a banker, auctioneer, various vendors, and so on. Also separate entrances to four small wildernesses each with its own quest, and a unique crafting system. 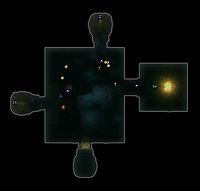 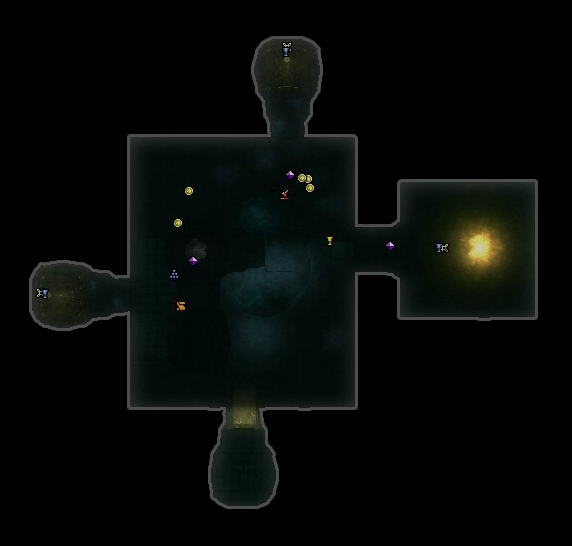 You must be at least level 13 to enter this area.

This area is accessible from the top of Falconer's Spire, the Guild airship tower on the northern edge of The Marketplace. Speak to Captain Agamon at the top of the spire, and he'll teleport you to an airship hovering over the seas around the Refuge.

(If the ship captain does not allow you on the ship, talk to Aurben in the marketplace to get added to his ship's roster.)

The Reaver's Refuge itself is actually underwater, and the airship has not landed - so just jump off into the water and swim southwest (a green star marks the entry point on your map). (There are atolls, but no danger of landing on them unless you try to do so.) The entrance is a short swim underwater, a dark crevasse in the seafloor. Click on it, and you will appear near the top of a high room and will fall directly into more water (if you don't try to hit the stones below) - and you're in the Reaver's Refuge.

There is a Spirit Binder aboard the airship if you want to bind there (and another in the Refuge itself), and Captain Agamon is there too - if you want, you can ask him to take you back to Stormreach without (re-)visiting the Refuge. If you do, you will be transported back to the top of Falconer's Tower, where you started.

NPC's and points of interest[edit]

One of the dialogue options with the Stormreaver will tell you that "...you must talk to Thear..." - this is only necessary if you intend to pursue Dragontouched Armor or run the quest Stealer of Souls. Otherwise, proceed directly to whichever quest you care to run.

Once you're ready to leave, it may not be obvious how to do so - there is no "Recall" option, nor portals out.

Recently, a "Guide"/Wayfinder has been added. Zrebog is not visible on the map, but he stands in the Northeast corner, next to the Auctioneer, and will take you to The Marketplace (west side, next to the fountain by the Bank). This is, by far, the easiest and fastest way out of the Reaver's Refuge and back to Stormreach.

Before this addition, the process was more convoluted, but still works, and results in you climbing onto the docks in the northeast of The Harbor. In the southeast corner of the central area (not obvious on the map) is a stone ramp - follow that up and speak to the Stormreaver himself, who sits on the upper level on the east side of the room. Ask him to "cast the Fly spell" on you, and you will start to float. With your mouse, aim "up" and move forward, similar to swimming "up" while underwater (although the spacebar will not work here to "surface"). Near the roof is a large glowing blue portal - when you get near enough to it, you will automatically teleport to underwater, below the airship that brought you here - and is now high above you, so you can't get to it.

Swim northeast, past the ship to the "Wavefinder Navigator", who is a very short swim underwater* - this Wayfinder will offer to send you back to Stormreach. You will appear on some stairs leading out of the water near the Leaky Dinghy Tavern, in the northeast part of The Harbor.

* Note - When swimming to the "Wavefinder", you may first see another Sahuagin nearby, Silt. Silt will cast Water Breathing on anyone... for 5,000 gold (500 platinum). This is not the wayfinder you were looking for - the swim to the entry is short, and there is nothing else of interest in the nearby waters. However, next to him is a dry crate to stand on, if you wish to cast Teleport or any other spell.