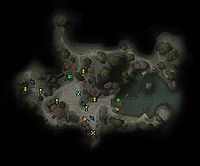 The introductory section of the game. After passing through Shipwreck Shore you are required to beat the four quests available in this area before the Korthos Island dungeon quests become available. Those quests must then also be completed before you are awarded unobstructed travel to The Harbor section of Stormreach. If you choose, you can bypass all this and just head to Stormreach, but the quests here all give decent starter items rather than random loot, which is often unusable, near-worthless, or both when granted by low-level quests in other zones.