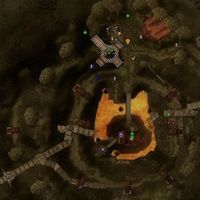 The Twelve in Stormreach are a branch of the powerful organization resident in Khorvaire. During the Last War the Twelve was founded as an independent organization to research the powers of magic. The branch in Stormreach is tasked with discovery and research of ancient relics from the giant empire. This area had been closed since the launch until Module 6.

Note that there is no mailbox in The Twelve. (What, you don't have Greater Sending?)

White Plume Mountain and Other Tales[edit]