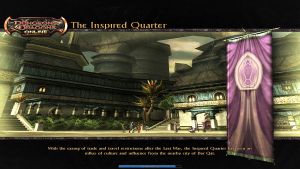 With the easing of trade and travel restrictions after the Last War, the Inspired Quarter has seen an influx of culture and influence from the nearby city of Dar Qat. 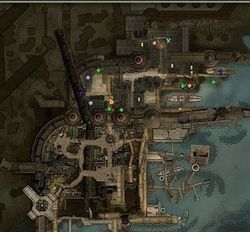 This area, the north-most portion of The Harbor, was once formally known as "the Aspirants' Corner" and "the Stormreach Port". Originally closed prior to Module 8, The Harbor was remodeled with a change in layout and then revamped and reopened by Update 1.

Characters must be Level 4 to enter via the gate to the Quarter, however any character can enter via a Stormreach Teleporter.

Wylkes Manor is a separate public area located off the western area of the Inspired Quarter, roughly due north from the gate to The Marketplace.