Shavarath is the Plane of Battle, where Devils, Archons, and Demons wage eternal war. Amrath, an island of rock hewn from the battlefield and levitated by Yugoloth magic, looms over it.

Amrath is a public area located on the plane of Shavarath. It was introduced in Module 9. Since Update 27, this location is accessible to free to play players. Shavarath Environmental Effects constantly affect characters while in Amrath. 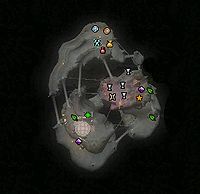 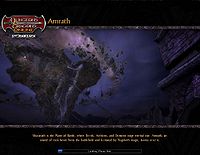 The Yugoloth outpost of Amrath is divided into small flat areas with various NPC's on each, all connected by a rough path and suspension bridges. Most of these NPC's serve some in-game function, but many are purely for color. You enter southeast, in an area that lies between the Enforcer's Prison and the Refuge.

Unlike the other areas in Amrath, this area is not separately labeled.

Refuge of the Mad Archon (south)[edit]

(* Health potions and Haste potions are not available)

If one follows the trail up (north) from the Outpost, they reach The Summit.

To get directly to the Summit, one can also jump off the side of any path or ledge and wait a few moments, and they will be teleported to The Summit.