For years the Raveneye Clan has sold rare pearls to House Kundarak, but now their home is under attack. Repel the invasion by battling the denizens of a vast and dangerous swamp, then take the fight to the enemy's underwater base in a climactic finale!

Sahuagin have attacked the Red Fens, virtually wiping out the Drow clan that lives in the swamp.

Below are more details about the wilderness area and quests that make up this Adventure Pack. 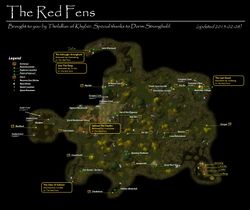 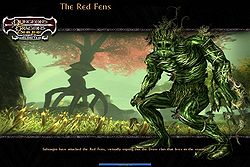 Within the wilderness are a chain of 4 Level 9 quests (Epic Level 21).

You can get to The Red Fens by talking to Ormar the Caravan Master in southwest House Kundarak.

There is no tavern in this area.

Note:The Claw of Vulkoor, Fathom the Depths, and The Last Stand must be completed (and turned in), in any order, to flag for the last quest, Into the Deep. You cannot red-door the final quest.

Note: Named items that can appear on this each individual quests end reward list will have a 100% chance of appearing on every third completion of that specific quest.

There are approximately 157 (range 153-162) monsters in each instance of the wilderness, requiring a minimum of 48 instances to complete the 7,500 creature slayer objective.

Each Rare Encounter is worth 600 XP, with a bonus of 3,600 XP for defeating all of them. These are random encounters: it may take several retries to get them to spawn.