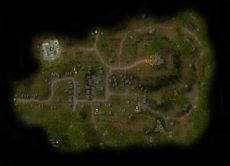 On the outskirts of southeast House Jorasco, just east of the prominent airship tower, lies Delera’s Graveyard, the final resting place of Delera Omaren, one of the richest and most generous citizens in living memory of Stormreach.

After her death, Delera dedicated her remaining fortune to establishing a final resting place for the poor, the graveyard which surrounds her tomb. But behind this generosity lies many dark secrets which can only be exposed by those brave enough to explore Delera's Tomb.