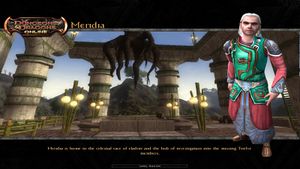 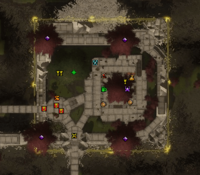 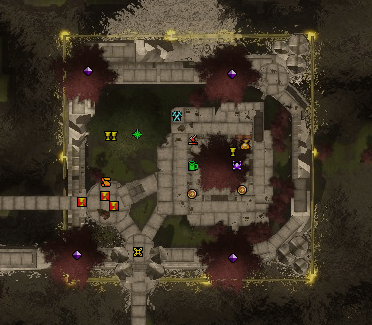 This small village is located in the center of The Vale of Twilight, entered via a portal from the south side. It is a small area with numerous NPCs, including:

The tavern is not the collection of tables at the entry (which is the potion shop), it is on top of the central temple, which can be accessed via the ramp on the north side of the temple.

You may receive mail from Valairea Satnarine directing you to go to Meridia.

Meridia can be accessed within the Vale of Twilight. The gate there is found at the top of a stone ramp which starts from midway on the path behind the tower of The Twelve (run either way, about the same).

However, if you go without first speaking to Gustavine Kyerrh in the Tower, you will get the message: "The powerful magics of Gustavine Kyerrh block your access to the Vale of Twilight. Seek him out within The Twelve."

Speak to Gustavine Kyerrh (found in the southeast corner of the Tower of The Twelve), and get the simple quest "Meridia". The gate at the top of the stone ramp, leading to the wilderness area of the Vale of Twilight, is now open to you.

The monsters in the Vale of Twilight are around CR 15 or so, so fight or avoid as you prefer (Invisibility seems to work well for most here). Follow the path, bear right at the first split, heading under the stone aquaduct and over the small bridge. The walls of Meridia are now on your left. The path winds a bit; take the next left, keeping the walls of Meridia on your left, and follow that to a magically supported stone arch, and a final left to the entry to Meridia itself.

The Teleport spell can take a character to Meridia, but only once they've finished the Meridia quest.

If your Guild Airship has a Farshifter among its amenities, characters can also reach Meridia via that, once they are sufficient level.