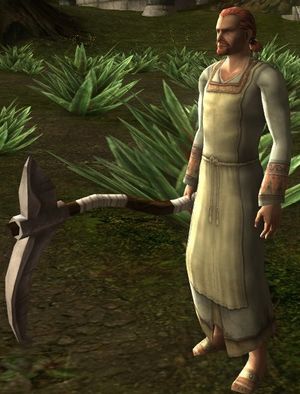 Description: Farmers produce the food necessary to feed the masses living in cities like Stormreach. Living outside the city walls, they often take the brunt of any raiding that occurs.

Three farmers attempting to till the land through an orc invasion. They carry large scythes and actively attack any hostile creature in sight. However, they will perish without help.

Five farmers are sharing a table in the Wayward Lobster. They have the exact same dialogue as the Refugees on Lighthouse Island even when it doesn't make sense.