Wrath of the Flame

The Silver Flame are famous for their zealotry in their crusade against evil. Many Demons and Devils have felt the burning pain of their blades. 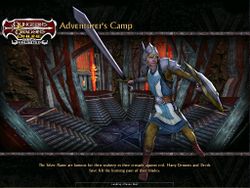 An Augur of the Twelve named Gustor Miles is concerned about reports of adventurers being attacked by the Silver Flame.

He has asked you to investigate these attacks at an Adventurer's Camp on the Devil Battlefield.