A Vision of Destruction

You have entered the lair of Suulomades, architect of the attacks on the Marketplace. His demise is integral to Stormreach's safety.

Delvarrion told you of a vision he had where House Deneith was sucked into an infernal portal, much like The Marketplace Bazaar. He fears this vision was a glimpse into the near future, and asked that you explore The Subterrane and determine if there is any truth to his fears.

Beware: As with almost all raids, you cannot join mid-quest. The first room you enter has a portal (to the main room) which disappears as soon as the fighting starts (so make sure everyone is thru the portal before anyone moves). Entering after it has started will lock you in that starting room with no way to proceed. You will, however, be able to pike and earn both completion and an end-reward, but will be unable to loot the chests. 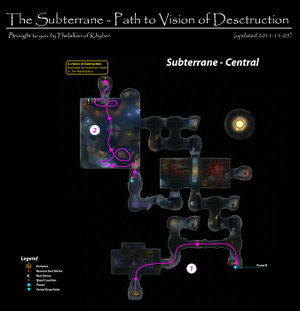 Path to Vision of Destruction Spoilers! 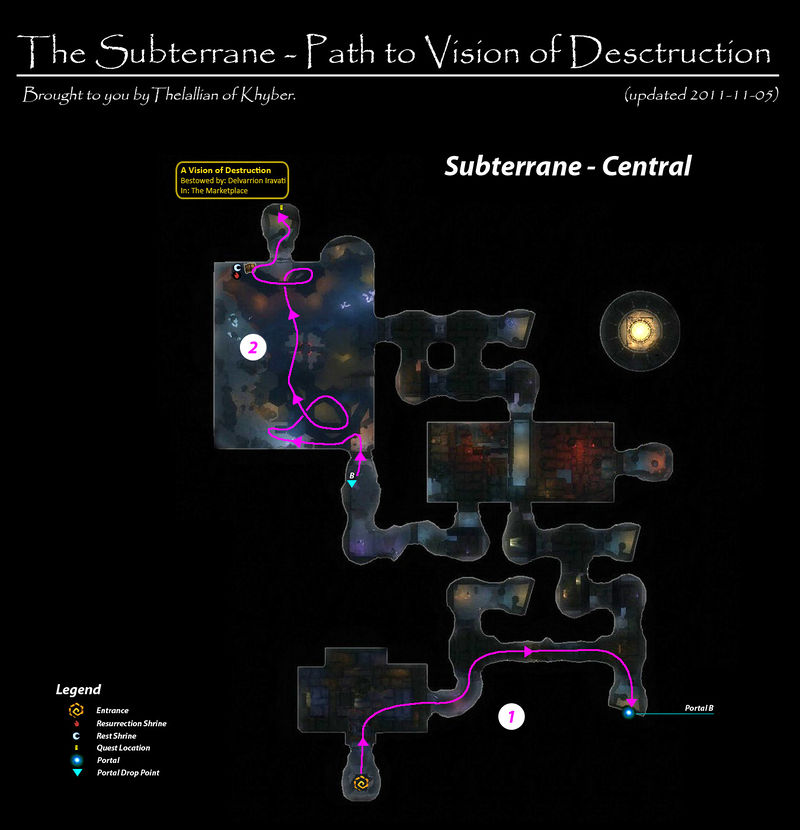 Getting to the entrance requires lighting 5 pressure plates in and around the Portal to the Battleground, which lowers a force field at the entrance to the Devil Fortress. One of the plates is inside the curtain of death surrounding the Portal (point 2 on the map) and requires tricking a monster into stepping on it. The curtain will kill characters, and pets don't seem able to activate it if no enemies are around.

A Vision of Destruction loot

The above was automatically compiled via DPL, 04:48:16 cache updated, time elapsed = -0.47933506965637 (please, do not keep reloading this page unless necessary, since it will not load from the cache, it will be re-generated from scratch every time, putting excessive additional load on the server).