Creatures from the Plane of Madness have disturbing effects on mortals.

Merla Bauerdatter's tavern is overrun with monsters from the Plane of madness! She and a few others escaped, but many of her guests are still trapped inside.

Merla has asked you to rescue her patrons and find a way to close the portal to Xoriat. The 'Sleeping Spell Inn' is located just outside of the Twelve. 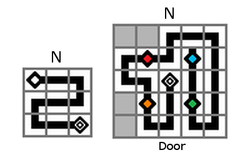 Delirium puzzles
Spoiler Warning: Information below this point can be considered spoiler material!