Seeing the devastation wrought by the Devils' attacks on Eberron, House Cannith agreed to send a shipment of its finest weapons to help with the counterattack on Shavarath. 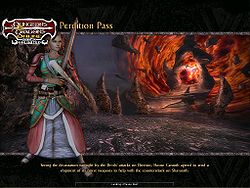 Mystichaze Shastein asked you to protect a mage who's bringing in a shipment of Cannith weapons from Eberron. She needs to do this at an ancient Planesgate located at the end of Perdition Pass.

Meet the mage at the mouth of Perdition Pass, which is on the other side of Devil's Spine on the Southern edge of the Devil Battlefield.

All traps are in the devil base area: