The Lord of Stone

The Lord of Stone was magically imprisoned within Khyber long ago, as was his bitter rival, the Lord of Eyes. 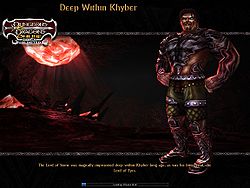 Use the Portal to Khyber near Krannoch to travel to the fabled underworld.

Notes: Getting conquest on normal difficulty is difficult as you have to kill nearly every enemy in the quest, and many are well hidden. It's reasonably easy on hard and elite, as there are far more monsters on those difficulties.