The Daelkyr Lord is absent, however his hound remains to breed. If left unchecked, the Xoriat spawn will boil forth from the Subterrane onto the streets of Stormreach

Through powerful divination, Brunaccio Patroclus, Grandmaster of The Twelve, has learned of a large cavern beneath House Jorasco. This cavern seems to be only accessible through the Subterrane, and the spell indicated a great Mother Hound of Xoriat has claimed this cavern as her own, putting the entire ward into great and immediate danger. The Twelve has asked that you explore the Subterrane, find the entrance to the Mother Hound's Lair, and destroy it, before its insanity begins to spread.

Getting to this raid is actually longer than the raid itself, as you must venture through the many denizens of The Subterrane. 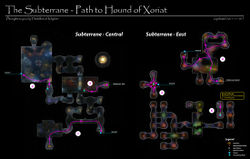 Path to Hound of Xoriat Spoilers! 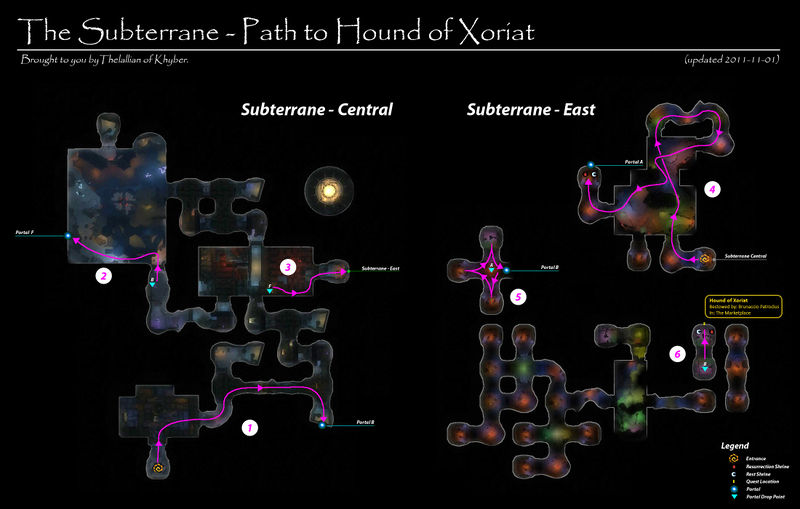 Xy'zzy is so powerful that you cannot damage her at all except by turning her three demon hound spawns against her. As you enter, there are mindflayers that come out of the portals that drop shards that allow players to charm the spawned hounds and force them to attack their mother, whittling down the boss's health to a point where player attacks will work.

A Bard is highly recommended in this raid to use the shards to buff the puppies to fight Xy'zzy.

One player, occasionally a player with a very high Intimidate skill, is used to keep Xy'zzy in the center of the room--popularly known as the "Chew Toy." The Intimidate skill may be 69/75/80 respectively for Normal/Hard/Elite. For halflings, there is a -4 size penalty.

An alternative, and sometimes more reliable method involves using a Solid Fog clicky, which generates aggro is placed by the player intended to tank. The player then moves up, causing Xy'zzy to run forward into the fog. The fog generates a small amount of aggro, ensuring she will be on that player for the duration of the raid. It is more reliable than Intimidate, because aggro generated by spells does not quickly fade over time.

Avoid getting hit by the Bees of Xoriat, which will inevitably kill you if you can't enter a Globe of Invulnerability. The "Bees" affect a player's ability to cast spells, concentrate, give penalties to attack rolls and gives Intimidate a -10 penalty.

Other players that aren't healing the Chew Toy players and her charmed puppies that are fighting Xy'zzy should be patrolling the exterior portals, removing any threat that could cause the charmed Spawns to stop attacking Xy'zzy. Keeping the party at the east portal minimizes spawns from making their way into the center.

As the puppies are key to destroying Xy'zzy, they must be buffed and healed once charmed. If the puppies do not survive long enough to bring their mother's health down to a low-enough level, the raid may fail as they take some time to respawn (5 minutes).

A party has a limited amount of time to dispatch Xy'zzy once a player engages the boss because if the raid continues too long, the respawning monsters (which include tiny but deadly beholders) pose a serious threat. The respawning mobs grow stronger, eventually including near-unkillable and quickly respawning Ancient Elder Beholders, which will eventually overwhelm the entire party.

There is a buff on Xy'zzy that continually counts down. (It is one hour long.) When it reaches zero the DM states "Now is the time to strike" which means Xy'zzy is vulnerable and can be killed. (Note: This is not a suggested method of completion as it takes over an hour, and will most likely include multiple deaths and drain HP and SP)

The above was automatically compiled via DPL, 10:35:20 result from cache, age: 12:06:36 of max 1 day - if you think that's not up-to-date, refresh it by visiting this link (please, use sparingly, since it puts some additional load on the server)