Xy'zzy, a mad creature from Xoriat, has come to Stormreach and made the Subterrane her lair. Gather your friends and destory the beast before her madness infects the entire city. 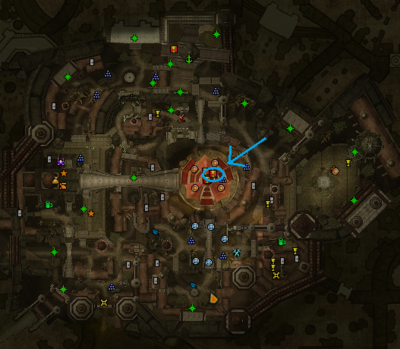 Note: Unlike the heroic version, you can talk to Niara Tonant and get onto the raid instance directly. No need to go through Subterrane instances.

Note: This raid is significantly harder than the heroic version, and requires a significant amount of planning to successfully complete on higher legendary difficulties.

It is important to prioritize the role of the charmer (the player that uses the control stones) and the role of main tank/chew toy.

The ultimate Charmer would be level 30 (each epic level gives summons/charmed monsters a stacking buff) with at least 7 warlock levels (Fortify Summons, Imbue Summons, Displace Summons from the Enlightened Spirit tree, plus the Haste spell) and 11 druid levels (Harrowing Pack, Pack Aptitude, and Tenacious Pack), have Harper Leadership and Heroic Companion (Harper tree), be in the Magister Epic Destiny (Grand Summoner enhancement, Sigils), have Natural Shielding (tier 2) and The Oncoming Storm (tier 3) twisted in from the Primal Avatar Epic Destiny, the feats Augment Summoning and Improved Augment Summoning, have 3 druid past lives, and have the 3 piece set bonus from the Cry of Battle filigrees in your main hand weapon, with a Bard friend to sing at them once charmed.

NOTE: Consecration with Crusade, Summer Smoke, Supple as Spring, and all Bardic Ballad buffs, do NOT apply to the pups. forum post

The raid takes place over several semi-distinct "rounds" that are marked as the time between when the Mindflayers spawn in each corner. As the stones only last a few minutes, it is important to ensure that buffs are applied to the small hounds as fast as possible. The monsters that spawn will attempt to first kill any players in the border halls, and then will attempt to enter the center where Xy'xxy is fighting. If a beholder's anti-magic field is able to hit a charmed dog, it will wipe the charm from the hound.

The above was automatically compiled via DPL, 04:10:19 cache updated, time elapsed = -0.71960210800171 (please, do not keep reloading this page unless necessary, since it will not load from the cache, it will be re-generated from scratch every time, putting excessive additional load on the server).