A scepter was once created by the Lord of Eyes himself - the Daelkyr Price of Madness, Belashyrra. Who knows what power it holds? 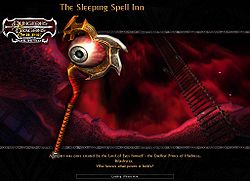 Rorry Malcanus, a lowly apprentice of the Twelve, decided to borrow the Scepter of Belashyrra and show it off to his girlfriend. Unfortunately this caused a portal to Xoriat to open while the pair were eating lunch at the local inn.

Go inside the Sleeping Spell Inn and retrieve the Scepter for Rorry.

Notes: Note the amount of kills needed increases based on quest difficulty setting and the above figures are for elite. Getting as many kills listed should get you the bonuses on all difficulties, but will have lower totals needed on lower difficulties. Aggression is only around 65 on normal, but actually getting 65 or more kills on normal is also far more difficult, as the total monsters, and monster respawn rate is severely reduced.