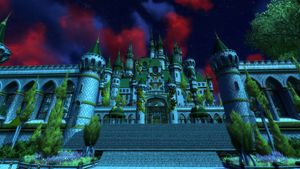 Wynwood Hall is a city zone introduced with the Fables of the Feywild expansion.

How to reach the hall[edit]

To reach the hall, each character must run through the Feywild wilderness. After this first run, speak to Gale Estival to be allowed to teleport directly from The Hut from Beyond in The Harbor.

When you open the map, Wynwood Hall can be viewed as broken into four quarters, divided by a wide east-west walkway and upper/lower levels split along north-south.

Starting on the east side (by the gate out), and listed (roughly) clockwise, and by whether they are "inner" (toward the middle of the area) or "outer" (toward the edge):