A small island halfway between Dar Qat and Stormreach, the Azure Shoals is home to an isolated tribe of Drow natives 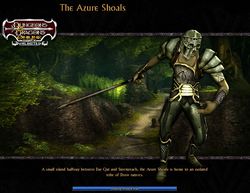 One of Coin Lord Graden Wylkes's agents was stranded on an island while trying to return from Dar Qat. Wylkes would like you to rescue the shipwrecked spy.

Meet Captain Carthy Cave in the Inspired Quarter, who will take you to island where the spy is stranded.