The Dreaming Dark are creatures that inhabit the Plane of Nightmares, where mortal dreams become manifest. Their relationship with the Path of Inspiration cult is known only to a select few. 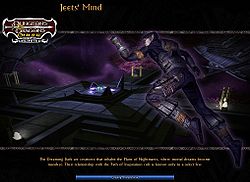 The Path of Inspiration is using creatures from the Plane of Nightmares to hold Jeets trapped inside his own dream.

The healer Valkin Ronsa wants you to magically enter Jeets's dream and free him from the creatures.

Must have Finding the Path completed to start this quest.

There is a central platform with four exits, three of which have mirrors. The mirrors have two sides (front and back). Once the objective available through the front entrance to a mirror is completed, the mirror deactivates and neither the front nor the back of the mirror is accessible.

The layout of this walkthrough ensures that every part can be completed. This is only possible if you have access to the Dimension Door spell and a way to unlock a door (Tip: Level 11 Fighter hireling, Mikayl the Pious, has Lesser Dragonmark of Passage, Spell-Like Ability: Dimension Door). If you don't, you can skip steps 1 and 2, losing out on the optional experience and chest from the Greed Monster.

Walk towards Jeets and kill the Dream Crawlers.

Charming Jeets in end fight can cause the end quest to bug out.