Beneath the outward face of the Path of Inspiration is the ugly truth: the sole purpose of this cult is to convert and subjugate the free peoples of Eberron. 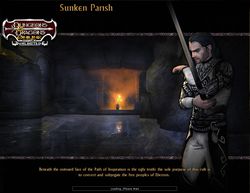 Coin Lord Graden Wylkes has received word that his eldest son Jonas disappeared when in the company of members of the Path of Inspiration.

The Coin Lord wants you to enter the Sunken Parish in the Inspired Quarter and bring back his son, Jonas Wylkes. 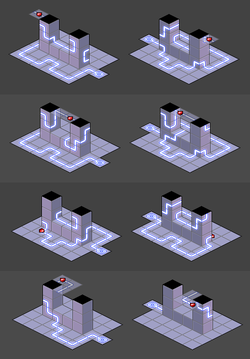 Puzzle solutions - there are four different variations of the puzzle, based on where the red destination gem is located. Each pair of graphics above shows front and rear of solution for each. 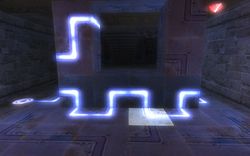 Screenshot of the optional puzzle

Notes: To get the Ransack and Vigilant bonuses, finish the end puzzle before talking to Jonas Wylkes again.