Lieutenant Zaira Dane has asked you to confront the mysterious invaders who are attempting to release Project Nemesis into the world. Head to the Hazardous Prototype Repository to prevent them from opening the vault.

You enter into a corridor which ends with a magic mouth that activates a portal. It leads you onto a balcony that oversees a laboratory, the main room of the raid. Lieutenant Zaire Dane is waiting for you to get all buffed up so you can enter into the main room to disrupt the process of the constructors that are about to solve puzzles around the room and Helma, the gnome artificer. She works on the north wall to unlock the massive bands on the huge vault door. If all bands are unlocked you have only moments to act before the vault door opens and the raid fails. To enter the laboratory talk to the Magic Mouth (beware this is a lockout). It opens a dimension door behind you that sends you down below.

The raid consists of three phases:

As you enter the raid, there will be a constructor working on each wall puzzle (NW, NE, SE, SW). Start by killing the constructors and making sure the runes indicated in red in the puzzle pictures are turned off. The constructors will keep spawning all through the raid and attempt to solve the puzzles. 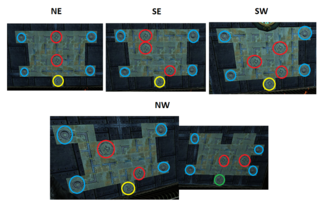 The runes (as marked in the "Wall Puzzles" picture) have four different functions. 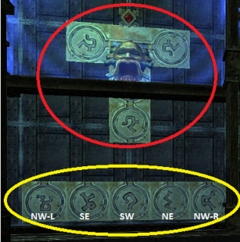 To prevent the constructors solving the puzzle you can

After disabling the puzzles, route power to the laser. The easiest way to do this is to route it from the NW left one to the NW right one. Watch for constructor spawns as they will change the puzzle and can cause the laser to lose power.

The laser control panel is located near the NW puzzles. If the runes next to it are lit, the laser has power. There are 4 gravity switches used to move the laser. The center button is used to fire the laser. The face above the panel allows you to recall an element and a team from an elemental room. 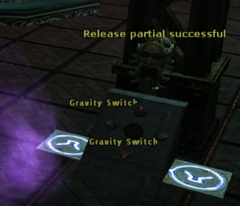 To eliminate a boss his elemental essence needs to be extracted with the use of a laser on the ceiling. In order to do that the party has to prepare one boss and kill him under the laser. Shoot him immediately when he is down to finish him off. The reaction time is less than 3 seconds. The laser moves in a grid with limited locations, so 3/4 bosses need to be tanked in a laser location. Irk moves along the grid and will stop in a location where the laser can reach him for several seconds (~17-20 seconds). The movement differs from run to run. A pattern is not known yet. If you are too slow in firing the laser the boss will have a shield that prevents the essence from being extracted and he will get back up at full health.

If the extraction was successful, the laser crystal switches color (blue for water, red for fire, white for air, green for earth). Bring the laser back to the NW platform, have one or more players stand on it and fire the laser again to release the essence. The laser can only carry one essence at a time. Three random players (with a higher chance for those who were standing on the platform the laser fired at) will get a colored circle. The circle allows you to enter the corresponding elemental room. Soul stones can be carried into the elemental rooms if they have a circle or not. Dead party members can get a circle which is removed when they are raised. Inside the room kill the red named elemental. It spawns elemental circles constantly which blow up after 2 seconds and do heavy damage.

Once the elemental is dead, you have disabled the battery successfully and the corresponding puzzle is out of power (NW left fire, NE water, SE air, SW earth). Depending on the kill order of the bosses you might need to reroute the power for the laser. Leaving Zulkis last will allow you to route the power from the NW left puzzle to the NW right (laser).

After the second element has been extracted, a red namened Emissary (pit fiend) and a group of trash mobs (Orthons, Devils, Abishai) will spawn. Kill the Emissary and the trash. Trash will now keep spawning until the bosses reactivate (see Phase 3). The trash even teleports after you into an elemental rooms, if you have aggro.

Qaspiel is only partially participating in this phase. He stays put on the center platform and attacks with certain spells. It is possible to intimidate him (118 on LH, 172 on Elite+). On Elite and higher diffuclties he casts a curse on the party. It needs to be removed within a ~five seconds or it hits for several thousand damage.

Phase 3: End it once and for all

Once all four batteries have been disabled (i.e. elementals killed), the bosses will return and the main boss Qaspiel Mistwalker will activate. He does cast spells all through the raid, but at this point he will also chase after you. You will need to kill the four red named bosses before Qaspiel to be able to defeat Qaspiel. If they are still alive and the party drops Mistwalker's health to ~10%, he will drain the others and heal himself back to full. Once Qaspiel is defeated, the raid completes. So it is possible to beat him down over and over until his drain kills the other bosses. It is not recommended though because it takes significantly longer.