From DDO wiki
(Redirected from Minotaur)
Jump to: navigation, search 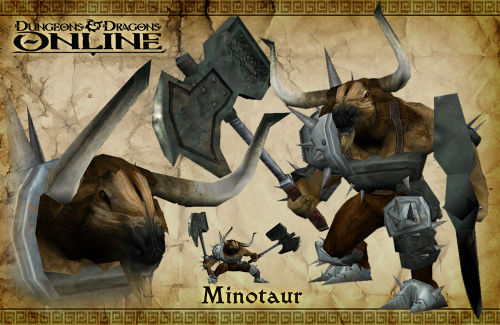 Once the tormented slaves and beasts of burden of an ancient giant empire, today the minotaur of Xen'drik is a fearsome creature that stands a full foot or two over the typical inhabitant of Stormreach. These bullheaded shaggy humanoids aren't all completely devoted to evil - some of them have been seen peddling goods inside the city. In this they are no different than the common avaricious dwarf - though perhaps a bit more appealing to look at. Outside of the settled regions, minotaurs are almost completely devoted to violence and a militant defense of their territory. Venturing into such dangerous territory is exactly the sort of peril that brings an adventurer fame and fortune.

In combat, minotaurs rely on powerful charges to knockdown foes to the ground and offer crushing amounts of damage. Careful heroes can often catch a red gleam in the eye of the bovine beast, and a change in posture just before the creatures lowers its head and delivers a ringing blow. That, of course, is the time to get out of way, or if it's too late - and if one possesses heroic strength - to raise one's shield and hope for the best.

In the land of Xen'drik, minotaurs are even more dangerous than some heroes from distant Khorvaire may be used to. With their barbaric upbringing, many minotaurs demonstrate a frenzy not at all unlike those of the most enraged berserker. Some elite minotaur tribes cherish this culture and violence, and these berserkers can be commonly seen dual wielding a pair of greataxes. Beware!

Minotaurs can be both melee and divine spellcasters.