Far below the city, the great furnaces and foundries of the Cogs form the industrial base of Sharn.

The Cogs is a Heroic level 15/Epic level 32 wilderness adventure area introduced with Update 42/Masterminds of Sharn expansion. It is accessible via elevator shaft in the western area of the city of Sharn upper district. Exploration messages can appear in more than one location, depending on your instance. 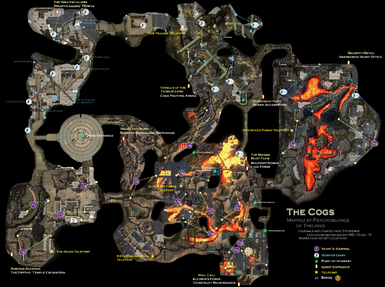 Map of The Cogs 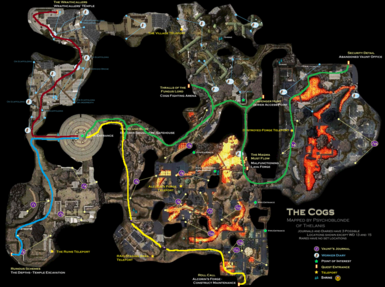 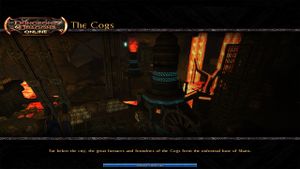 Below the City of Towers, there are under-warrens known as the Cogs. 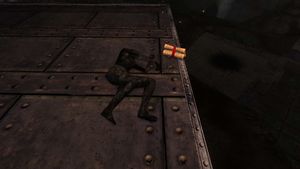 The burned body of the factory worker, Mattie Thorne, lies next to her last journal

All Cogs quests are walk-up, no NPC contact exists for these. There are no end-rewards for any of them; you get whatever end chest loot is in-quest, that's it.

Rares in the Cogs are unusual in that nearly all can spawn in multiple locations. (A list of specific, known spawn locations for each rare can be found on its own Discussion (Talk) page. (e.g. Talk:Gristle). Note that for convenience in displaying their locations, the order the rares are displayed in here is different to the list in the quest journal.

I could see the towers long before I reached the city. They glittered on the horizon like tiny jewels. I was eager to arrive, but the horses were slow. It was already night by the time we reached Wroann's Gate. Up close the towers were even more magnificent - vast, bright pillars soaring into the night sky. I couldn't wait to soar with them.

I rented a shabby little flat in Foundation and applied for a job at Belgrave's Emporium. Those first few days were so exciting for a girl from Mistmarsh. The Emporium was like nothing I'd ever seen - so big, so crowded, so elegant! And then I heard that the Emporium was nothing compared to the shops up on Skyway. An island floating in the sky - just imagine.

My neighborhood was hardly glamorous. It was drab and dark, overshadowed by the towers. But every morning I'd take the lift up to one of the city's bright and gaudy shopping districts and look for a job. I was determined to be up where the air was clear and I cold see bustling city below me.

There was a beggar on my corner, an odd man with a crutch and a scrawny little cat. He asked passers-by for coppers. One day I saw him on his knees pleading with two member (sic) of the City Watch. Some neighborhood thugs had taken his coppers and killed his cat. But the Watch did nothing. They laughed, pushed him into the gutter, and went on their way. There was a crowd watching. None of us did a thing. We just scuttled back to our homes and pretended that it never happened.

I didn't get the job at the Emporium. I didn't get the next job either. Or the next. Then I counted my coppers and discovered that in a few days I wouldn't be able to pay the rent for the shabby little flat. Someone told me that there was always work in the Cogs. And what choice did I have? I didn't have enough money to go back to Mistmarsh.

The lift went down and down, for what seemed like forever. When it finally stopped, I was deep underground. There I was, with a thousand others, ready to report for work in the Cogs. I didn't know much about the Cogs then. I'd always heard about Sharn's famous towers. I never asked about what lay underneath. Now I was about to find out.

I remember my first day in the Cogs. No sunlight reached us. Huge machines loomed in the shadows. And the people. I was ready for Bugbears and Goblins and Warforged, everyone knew about them. What I didn't expect were the others. People like me, wearing rags and huddled in shanties made from scrap.

It was a long walk to the Forge, through ruins and a shanty town. Strange metal things with too many legs scuttled up and down the path, hauling who-knows-what to who-knows-there (sic). I was in another world. This is where I would spend my days, working deep in the underworld of Sharn.

They called it a Forge, but I had nothing to do with that part. I sat in a workshop making the cases for the device. My job was to hammer in the little wooden pegs that held the case together. Easy work for a wood joiner's daughter. If we asked what the device did, or how it worked, they told us it was none of our business.

They watched us very carefully. None of us were allowed to discuss what we did at the Forge. No strangers were allowed inside. People in fine robes went in and out of one of the workshops. No one knew what they did, and anyone who asked lost their job. So...we didn't ask.

People in the workshop were always getting sick. Nothing too bad, just a nagging cough. Then a few weeks later, they'd be gone. They'd just never show up again. When I started to cough, I was gripped with fear. But I still took that lift down every single day. I needed the money to pay for my shabby little flat up in the light.

It was just an hour or two before closing. We were working on the last pile of cases for the day. Suddenly there was a tremendous roar. Everything shook as if the world was ending. The noise - I thought would never stop. It was like metal screaming. The Forge had toppled over because of the explosion.

We heard shouts from outside. Everyone in the workshop rushed out, desperate to escape. Once we got outside, it was impossible to recognize anything. There was fire and wreckage everywhere. I was following my friend Ora at first, but I quickly lost her in all the smoke. I saw one of the men in robes run past. He was on fire.

There were flames all around. I found a ramp leading up, but it turned out that the ramp went nowhere. All I could do was stand up there on the walkway and look down at the flames below. "Fire! Fire!" I shouted. I was too high up for anyone to hear me. Besides, there was no one down there who could do anything about it. But you shout "Fire." Because what else can you do?

I ran as fast as I could for as long as I could. I looked everywhere. I was sure I would find a way out. But there was no way out. No matter how fast you run, you can't outrun the fire.

When I first saw Sharn's towers, I knew at once that this soaring city would be where I would make my mark. This was the only place on Eberron that could provide me with the tools I needed - talent, money, and, most importantly, power.

You can see magic everywhere in Sharn. Magic supports its towers, powers its skycoaches, and adorns the trinkets of the wealthy few... but only the few. An ordinary city-dweller can't afford a simple repair spell, let alone a Shield Guardian. The common folk sweat to earn their livings, just as they always have. Even in Sharn.

Imagine this: what if ordinary people had access to magic? Nothing too complicated, just a few simple spells that would vastly simplify their lives. Imagine the revolution this simple change would create. I knew that bringing magic to the masses would secure the name of Vaunt in history...not to mention make me very, very rich.

Building my first prototype took no time at all. The device cast a few simple spells and used a Cannith crystal for power. Thrilled by my success, I immediately showed my invention to an acquaintance, a wealthy member of House Kundarak. I offered him the rare chance to invest in something that would change the world.

My prospective investor was not impressed. His objection? My prototype cost as much to make as a skilled workman earned in a year. The cost was due to the Cannith crystal, of course. I had to find another way. A cheaper way.

Cannith crystals were too expensive. So how to power my device? I needed an arcane energy source that was cheap and universally available. I tried a thousand different approaches, and rejected each one. Then I hit on an idea. It was an unorthodox solution that required unorthodox talent. But now I knew how to build my device.

My investors were impressed by my new methods. They were even more impressed when I told them how little it would cost. Even after paying for the necromancers, we'd still make a tidy sum. We quickly arranged to build a manufactory down in the Cogs.

Word of the Vaunt Arcane assistant spread throughout the city. My star ascended. Soon I was meeting with council members and attending parties with Sardan Boromar himself. The wizards were hostile, as I had expected. But Sharn is ruled by merchants, not wizards.

The Copper Concord of the Aurum made me a member. They've already told me a few of their secrets. A great honor, but only the beginning. My rightful place is as a member of the Gold Concord, and I will not rest until I have attained it.

I was having dinner in Skyway with one of my investors when a Gargoyle messenger charged in, covered in ash, babbling about an accident. It created a scene, as you can imagine. Eventually I got some sense out of the brute. There had been an explosion at my forge down in the Cogs. The entire manufactory was in flames.

I rushed to my forge and found it in ruins. Only one of my necromancers had escaped the blast. He lay there dying, burned beyond recognition. With his last strength he chanted something over and over in a strange tongue. One of the apprentices said it was a curse - a curse on me.

Of course I wanted to rebuild immediately. But there were issues. The City Council was asking questions, and the salvage workers reported seeing strange things deep inside the ruins. I needed to know what I was dealing with, so I sent out more scouts. They did not return.

I hired experts from Morgrave University, at no little expense. They put a name to my problem - Forgewraiths. Spawned by my forge's destruction, controlled by a powerful curse, those undead creatures had only one wish: my death.

I don't dwell on problems; I solve them. If there was a curse, then I would find a way to negate it. So I hired more experts. I fortified my security. I sent agents to scour the world. And in time I found the solution - an ancient and immensely powerful artifact in Stormreach. And just imagine - the locals were using it in a lighthouse!

I paid the Boromar clan a hefty sum to bring me the Stormreach beacon. And just like that, the Forgewraiths are no longer a problem. The artifact keeps them at bay nicely. Now I can concentrate on building a new forge, manufacturing my device, and pursuing my other plans. This - all of this - has just been the first step. Now it's time for the golden second dawn of Lucian Vaunt!

There are several points in the Cogs wilderness to which you can be instantly teleported by the Cogs guide (standing right outside the Cogs entrance). Teleport points are unlocked by completing the quest nearest to them, or in the case of the raid staging area, by completing the Masterminds of Sharn chains parts 1 & 2.