Once a feared sorceress, Mistress Orphne is now a mere shadow of her former self...a prisoner of her own mind

Bodies of assassins lie outside Mistress Orphne's haven, slain by Orphne's loyal friend and protector, Shen Kulle. --However, the assassins succeeded in trapping Orphne inside her own mind, dooming her to a slow death.

Shen Kulle must stand guard against further attacks... but perhaps you can enter Mistress Orphne's Haven in the House Kundarak Enclave and free her from the prison of her mind. 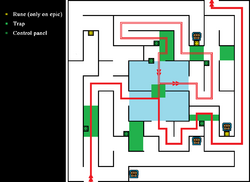 Prison of the Mind maze
Spoiler Warning: Information below this point can be considered spoiler material!

Many random in the maze. They do not always spawn.

After defeating Orphne's Shadow, the final chest is trapped with a blade trap. The trap triggers when the chest is opened.

There are many traps in this quest, so bringing a Rogue can be useful.

This quest is now referred to as "The Prisoner" in Adventure Compendium, however it used to be called "The Prison of the Mind".

Part two of the Vault of Night (story arc) (often referred to as VoN2). Marek is sending you to help Mistress Orphne, who has been poisoned and is being held a prisoner within her own mind. She is slowly wasting away and needs your help in being freed.

The entrance to this quest can be found by looking for Mistress Orphne's haven within House Kundarak. Specifically, her protector Shen Kulle, a blond elf who holds a sword, stands outside of a quest entrance door located west of the northwest base corner of the House Kundarak Bank. Speak with him to get hold of a potion that will allow you to enter Mistress Orphne's dreams and attempt to rescue her.

This quest has a unique map (being a nightmare dream), so it can be difficult to find your way around. You have to recover four of Mistress Orphne's missing possessions to help her recover her faculties.

Once again after completing this quest, go speak to Marek again to move on to part three, Gateway to Khyber and then the Jungle of Khyber.

This is not the fastest, merely an easy order to explain. All directions start from Orphne, where you entered the quest. The quest map will not yield any info except which way you're pointing, so follow along accordingly...

The quickest and easiest to obtain. Proceed to the south (right as you enter) and to the southwest corner of the platform Orphne is on. There, you will find a stone block ramp leading up roughly west. This path splits - in front of you is an obvious ladder - that's for the Silver Mirror, later. Look to the left (southwest) for a wooden plank that spans the stone tile path to another stone platform which is apparently empty. As soon as you proceed across the plank and onto the platform, a beholder appears and attacks you. Kill it and a chest appears with the Golden Locket inside.

Probably the second easiest to obtain after the Golden Locket. Proceed to the left and north of Orphne, and there are again two choices - east up the stone stairs (Wooden Dagger path, later), or (for this item) continue north across the fallen stone pillar path. Defeat the beholder that appears on the platform, and proceed up the ladder there. At the top of the ladder, you will need to defeat a Quori Stalker (pink/magenta phase spider) to proceed along the path to the lair on the next stone tile platform. There, defeat the lair of Quori stalkers upon which a ladder will appear to allow you to proceed to climb up to the next platform level. There will be a collectable in a wood plank pile and the Memnos Blossom will appear as a collectable in a small alcove/copse of trees. Take the Memnos Blossom without any traps or further monsters to deal with. Jump off south/southeast to return back along your path.

There is a resurrection shrine, but no rest shrine here.

This is the second hardest item to obtain, but leads to a relatively easy shrine right after the wind-traps. Go the east and up the stairs, above the central area. Patiently* work your way east, running to stop after every 1-2 pillars, hiding behind the stone pillars to avoid being blown off the path by the gushing wind blasts - you'll be fine if you're careful. Ignore the shadow NPCs, proceed past the shrine, and kill the Beholder that appears at the end of the stone tile path.

Jump to and climb up the ladder - avoid missing so as not to fall. At the top, drop down a bit and kill the Tharaak hounds that will appear before the next ladder. Proceed up that next ladder, and kill the green oozes that drop from the trees above - there will be a half-dozen of them. (A collectible is located to the west (left) behind a stone pillar along the edge of the platform.) After killing the oozes, proceed up two sets of small ladders against the stone rock wall.

At the top, you have a fallen stone pillar to cross that has gushing wind blowing intermittently across it to knock you off if you are not fast enough to get across. Again, be patient* and don't try to run the whole thing at once! There are some safe spots - "X" marks the spot! Go to chest to get wooden dagger. Dimension Door is not needed for the return - just use Feather Fall, jump off to the south after the chest and swing around.

This is the hardest of the four items to obtain if you had to figure it out on your own. Go to the southwest corner of the platform Orphne is on, and up that stone block ramp to the tall ladder (the one we ignored for the first item). Climb that ladder, and you will soon find yourself facing north into a stone walled maze where Tharaak hounds and Fire Minotaurs with axes lurk. Someone whom can disable traps is best for this maze as arrow, spike, and dart traps are found as designated on the maze map (above, right). Follow the maze path. The maze map (see graphic, above) is for the most part correct, save for when you get to the middle water pool. Assuming you are following the map and are disabling traps, once at the center pool on the west side, proceed east into the water and jump up onto the wood plank walkway and proceed south. It is your choice whether you wish to disable traps and fight monsters, but you could just as easily run past all of them given good enough reflex.

Once out of the maze to the north, follow the wooden path up to the top stone level, and then up again via more wooden ramps (to your left) to the next level. (Although sound effects indicate there is an impending attack on you, ignore and proceed without incident.) You will soon find yourself overlooking a stone tile platform with the Fire Giant Ingstoldt who awaits your parley. He will bargain with you to kill mephits in the locked room behind him. It is your choice to fight him or not. If you agree to kill the mephits, the door behind him opens and the mephits appear once you enter the room. Kill all of them (two waves). Once done, go back out and obtain a silver key which Instoldt promised to open the chest where you will find the silver mirror. If you prematurely open the chest, Ingstoldt will attack. If you have not killed all the mephits, Ingstoldt will tell you to go back in and finish the job (sometimes you miss one hiding invisibly in the corner who loiters and did not come out to attack). Dimension Door is by far the fastest method of return from this one.

On the way to the Wooden Dagger, you will find a small village with the illusionary presence of some NPCs. They don't react to you, and never say anything. They are listed here just as trivia: