The Haunted Halls of Eveningstar

Rumors say treasures still await those brave enough to delve into the depths of the Haunted Halls. A classic D&D module brought to life for CR 28 adventurers; enjoy a special commentary from Forgotten Realms creator Ed Greenwood! This Epic Level 28 quest pack includes one huge adventure and dozens of side objectives.

This single quest adventure pack is free to VIPs, and is available for Premium/Free to Play players for 650 DDO Points.

The original Haunted Halls of Eveningstar masterpiece by Ed Greenwood was published in 1992.

Ed Greenwood is also the co-creator of the Forgotten Realms world. 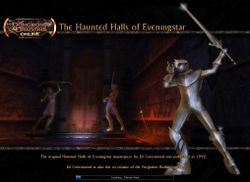 Villagers of Eveningstar tell tales of the bandit lord Rivior, whose ghost haunts the stone halls hidden in a gorge by the Starwater River...and whose treasure may still be hidden there. Speak with Alyn Farrago in front of the Lonesome Tankard in Eveningstar, to learn more of the storied halls.

This quest is based on classic the AD&D 2nd edition PnP module of the same name and is narrated by Ed Greenwood. It has three play modes:

The Extended and Commentary modes are accessible only after you finish the Standard mode at least once on that specific character. They are considered different quests for the effect of XP ransack, but are considered the same quest in terms of chest ransack. In Commentary mode the audio clips from the interview will spam and repeat for the duration of the quest making gameplay more challenging. 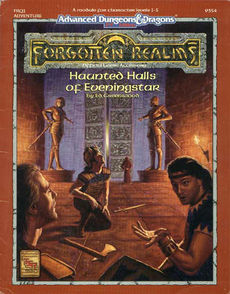 Many of the traps can be used against the hostile inhabitants and can damage them. For example: luring the risen Ju-Ju zombies from the muddy pool in the north-east area, into the chasm created from the collapsed passage floor nearby, automatically kills them.

This quest is vast, consisting of many areas which you can access in almost any order. Think of this as another kind of Dr. Rushmore's Mansion. There are a lot of secret doors to find, and some of them have DC's low enough to be discovered with True Seeing, but not all, or the most important ones (Search DC).

The first gate "Rusted Gate" requires a Minimum Strength value of  ●♦20Epic Normal ●♥30Epic Hard ●♠40Epic Elite to open (it shows the actual Minimum Strength value required on the Gate itself, if focused upon). If your character lacks the strength to open it, you can still access the dungeon by the secret doors on the left and right wall. The Secret door on the wall to the left of the gate sends you behind the gate, and can be found with True Seeing.

Your first main objective would be to access the Throne Room and kill a boss there. To do that, you need to locate and place in the sockets two Crests to open the Throne Room gate.

The doorways at the back of the Throne Room lead to 3 purple named bosses. This would be your second (optional) objective, since their chests can drop named items.

Your third and final objective would be to agree with Whisper's demands (locate the dragon egg and steal it – or fight the mummy) or disagree with them (so that you have to slay him to complete the quest). You can't fight the dragon on Standard mode. You also cannot encounter the dragon if you kill Whisper.

The various bosses can drop the following named loot (All ML26, Bound to Character on Equip

Zhentarim Attuned: This item has been attuned by the the Zhentarim mage, Whisper. It can be upgraded with Zhentarim Black Stones.):