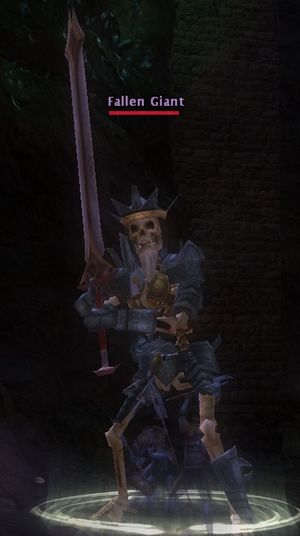 
Description: At the start, the giant is pinned down by a spear, and you should remove it to revive him. Removing the spear takes around 40 seconds, time where you should not be interrupted. It is possible to do it solo, if you have good stealth skills.

Once the giant is alive, it is a standard battle, but if you can avoid damaging the ghosts, they will ignore you and focus on the giant. Once the giant is defeated, you should click on his corpse and pin him again with the spear. If you take too long to pin him again, he will raise and continue fighting, forcing you to defeat him a second time.