You have travelled to the wild Borderlands. Farms and settlements are rare and travellers are few in this rugged valley. Hostile monsters from the hills lie in wait, ready to attack anyone foolish enough to leave a fortified area. 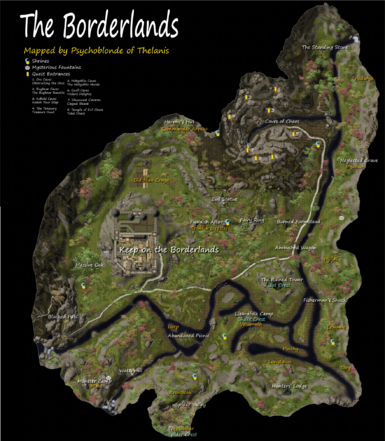 Map of The Borderlands

You can access the Borderlands in the following ways:

There are two mysterious fountains in the Borderlands. Using them provides a random buff or debuff, or a special sixty-minute elemental buff, but only benefits the first person drinking from the fountain. Possible buffs are:

The Keep on the Borderlands story arc is bestowed by Norworth Koln. After completing all of the quests, he will give an end reward for the entire chain.

To get a Mount from the Borderlands is easy, even for a low-level character, but takes a little work. You need 15 Quaal Feather Tokens, and they drop only from chests found with Rares in the Borderlands. The map (below) shows an optimal route to hit every location a rare might spawn; no guarantees how many will in a given instance, so it's best to hit all of them. 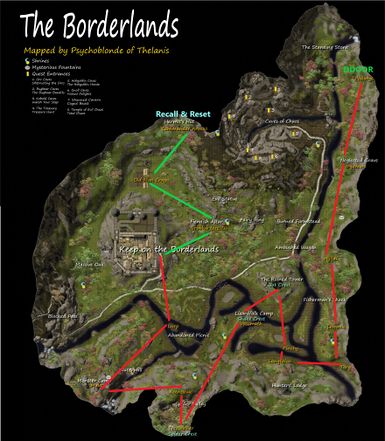 (From experience, an average run nets about 3-4 tokens each, or about 4-5 runs (maybe 1.5-2 hours, more or less, depending?), but each run can vary greatly. Don't be frustrated if you get fewer, and don't crow too much if you get lucky.)

From the gates of the Keep (central west), start south, following the red route - there's a large rock that you'll run to the left of (to the Mudman), and then go uphill, and continue from there.

When you get to the Harpy (Podarge) in the northeast, the fastest option is to use Dimension Door to get back to the Keep gate and start the green route from there; you can't recall if you want to hang on to the crests (see next). Without DD, you have to run - start southwest across the river and the valley, then up the far side and follow the ridgeline west. From there, it's about the same to Grublub (to use the 3 crests) or the Hermit/Beekeper, and then finish the green route and recall, reset, and repeat as necessary to get your 15 Tokens.

If you want one guaranteed chest, be sure to search for the 3 crests as you go: Spider crest (in the Spider valley), Snake crest (in the Lizardman camp), and Bat crest (around the Broken Tower on the hill. There is no Rare at the broken tower, but these three crests guarantee Grublub and its chest.

A mighty Keep stands here on the border between Good and Evil lands. From this isolated base, a brave few strive to stave off the darkness that would otherwise overwhelm the wilds.

A small hermit's hut stands here, surrounded by well-tended beehives. The place looks like it's still inhabited, even though the Caves of Chaos are just over the hill.

This was once a great and impressive tower, but it was reduced to rubble in a battle long ago.

There's a small ring of mushrooms here. Is the fairy ring a natural phenomenon - or something created by the Fey?

You find a grave here in the brush. It's been neglected for many years.

Enchanted stones stand in a ring. The weathered pillars look like they've been here for a very long time.

A monster attack has reduced this farmstead to a smoking ruin.

With the Keep under siege, the local Lizardfolk have grown bold. They've built a camp down by the water, right in the center of the valley.

Dense webs cover the trees in this dark and isolated gorge.

This newly-built statue gestures menacingly at the Keep down below. The Cult of Evil Chaos has made its arrival known to everyone in the valley.

A small fisherman's shack stands deserted on the riverbank.

A massive oak, taller than any of the other trees, dominates this corner of the valley.

The water wheel continues to turn at this mill, even though the owners have long since fled to the safety of the Keep.

This hunting lodge has been boarded up and abandoned in the face of ceaseless monster attacks.

The road leading up into the mountains has been blocked by a recent landslide. The valley has been cut off from outside help.

Monsters have built a small camp atop this hill, giving them a commanding view of the valley below.

You get an uneasy feeling as you approach this ancient altar.

Minor bug: One of the locations for the spider crest, a small pile of stones, will give a "spider crest blocked" message if you are standing directly on/near it. You must stand a short distance from it to take it.

Someone's plans for a nice, quiet picnic on this island came to an unexpected end.

A smashed wagon stands in the middle of the road, all that remains of an ambushed caravan.

Small, squalid cave entrances dot the ravine walls. These must be the Caves of Chaos, where the cultists and their monster allies have made their base.