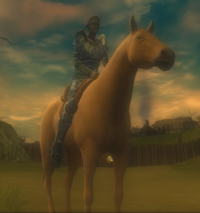 Mounts can be summoned in almost all wilderness adventure areas (they do not work in The Restless Isles or The Waterworks), all public areas, and select quests (typically ones containing other quests like Gateway to Khyber.) They grant a bonus to run speed:

Mounts have been introduced in Update 44.

In terms of game mechanics, mounts are items. Double-click them to add them to your mount stable. The stable is server-wide, available for all your characters on the server. You can access it on the horseshoe tab of your inventory screen. From there, you can drag the mount to your hotbar. Use the hotbar button to mount.

Mounts are available from multiple sources:

Note: Once the certificate is consumed, the mount is added to your stable, and it can no longer be upgraded. 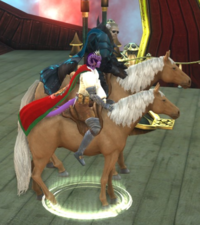 Example of a palamino mount being ridden by a Purple Dragon Knight (rear) and a Tiefling character (front).

You do not have to buy different horses for each race, the horse you summon will scale to your character's current size. This includes later reincarnations (which make characters appear slightly physically larger for their second and then third/subsequent incarnations) and race changes over lives.

The size of the mount has no effect on speed or combat.

Most (all?)needs verification taverns don't allow mounts to be ridden inside them - this includes open-air taverns, as well as the Drow camp in the Isle of Forgotten Dreams. Rather than dispelling the mount automatically, they instead apply a special status condition known as Mount Suppression. Mount Suppression dispels your mount's appearance and the jump and speed bonus while in a tavern, but as soon as you exit, the mount appears again.

Pressing the dismount key (Shift by default) will dispel your suppressed mount, and you will be put back into mount suppression if you summon a mount while in a tavern.